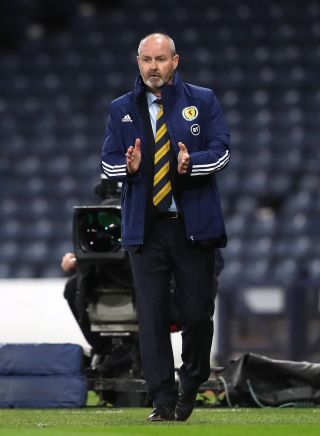 Steve Clarke believes Scotland’s narrow win over the Czech Republic is proof positive his side are ready for next month’s Euro 2020 play-offs.

The Scots were under pressure to beat the home side in Olomouc after Jaroslav Silhavy and his first-choice squad were forced into quarantine.

They scrambled together an entirely new group and fielded a side containing nine debutants at the Andruv Stadion.

But the rag-tag group of players named by stand-in coach David Holoubek took a surprise lead when Jakub Pesek ghosted past the static Scottish defence to score the opener after 11 minutes.

Thankfully for Clarke and his side, there was no further slip-ups and they hit back with Lyndon Dykes’ maiden international goal on just his second appearance for the Dark Blues, with Ryan Christie slotting home his second penalty in as many games to seal a 2-1 lead.

Yet there were some nervy moments late on and Scotland had goalkeeper David Marshall to thank for some vital stops to ensure they maintain a five -match unbeaten streak that stretches back 11 months.

They now have some vital momentum going into October’s play-off semi-final clash with Israel but Clarke knows not everyone will be so enthused after his side followed up Friday’s drab 1-1 draw with next month’s opponents with another unconvincing performance against the Czech Republic.

But the manager saw reasons to be optimistic. He said: “Listen I knew when it all unfolded over the weekend that it was going to be a difficult game for us.

“The Czech Republic were going to play the game of their lives. It would have been a fairy-tale for them. For us it was always going to be a difficult night but we got the win.

“That’s five games unbeaten. That’s a positive. I think the reaction to going behind tonight is a positive.

“The way we defended in the last 15 minutes was a positive. It doesn’t matter who you play. If there is only one goal in the game and they can keeping putting the ball in your box then you have to show resolution, character and defend well. We did that at the end of the game.

“Both strikers scored, so positives to come out of it.

“I’ll go away now and analyse both games we’ve played and get ready for next month.”