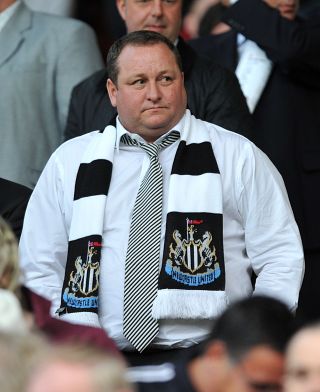 Steve Bruce insists owner Mike Ashley was disappointed Newcastle’s proposed takeover fell through because it denied the club the riches required to compete with the Premier League’s elite.

The sportswear magnate stood to pocket £340million had Amanda Staveley’s Saudi-backed consortium managed to get across the finishing line, and his anger that the takeover did not happen has been made quite apparent.

However head coach Bruce, who met Ashley when he visited Tyneside on Wednesday, has claimed that his sorrow was twofold.

He said: “The takeover has fallen through, which has disappointed him – for the fans, I think, more than anything because obviously, it was quite a unique takeover.

“It was something that might have taken Newcastle to where everybody wants it to be.

“I’ve looked from afar for years and it always seemed Newcastle was in a takeover. I think this one was a little more unique.

“It might have lifted the club into the realms of a Manchester City maybe, or a Chelsea. In that respect, it was disappointing that it fell through because of who was involved.”

Bruce’s comments may raise eyebrows among those desperate to see the back of an owner whose inability or unwillingness to invest substantially enough in the squad to allow the club to compete among the upper ranks of the top flight has proved a constant source of frustration.

But the man who bought the business for £134.4m in 2007 has been trying to sell it almost ever since and, having failed to do so once again this time around, he has given Bruce the backing to recruit £20m striker Callum Wilson, £13.5m full-back Jamal Lewis and free agents Jeff Hendrick and Ryan Fraser at a time when many clubs are feeling the pinch of the coronavirus pandemic.

The new-look Magpies will launch the new season at West Ham on Saturday evening with the head coach confident that his squad is significantly stronger than it was 12 months ago, if not yet ready to take on the big boys at their own game.

Bruce said: “I’d be kidding myself if I think now this Newcastle team can go head-to-head with Manchester City and say, ‘Go on, we can play exactly the same way as they are’. Therein lies the conundrum for us all.

“In my experience, the big ones at the top are as far away as they’ve ever been.”