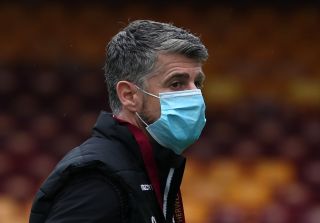 Motherwell manager Stephen Robinson hailed Allan Campbell after the midfielder followed his international winner with the only goal against St Johnstone.

Campbell turned away from two opponents and fired home from long range to add to his Scotland Under-21 goal in midweek.

The 22-year-old has now scored most of Motherwell’s Scottish Premiership goals this season with his second giving them their first league win.

“He’s top class, he’s a boy I don’t know how I would replace,” Robinson said.

“In every interview, he epitomises everything we do at this football club. If everyone was like Allan Campbell in football then life would be very, very easy.

“He had six goals last year and there’s a good chance he could get more. He scored a great goal for Scotland in midweek and that finish was excellent.

“His work-rate, desire and all-round game is excellent. We can play better on the ball but whatever way you play Allan is right up there as one of the best players on the pitch every week.”

Motherwell, matching Saints with three central defenders, sat in after the fourth-minute opener as they responded to Robinson’s call to “win ugly”.

“We did it against Celtic and it was very successful for a period of time,” Robinson said.

“We let St Johnstone have possession in areas that weren’t going to hurt us, and I asked the boys to defend with their lives and midfielders win second balls and the centre-forwards to run themselves into the ground, and you’ll get your rewards.

“It’s the least possession we have had in any game – 40 per cent, even at Celtic Park we had more.

“But that was the game plan, we wanted to hit them on the break and, if I’m being really critical, our passing and decision-making could have been better when we did break.

“But the determination and will to win that I asked for, they showed in abundance.

“I’m delighted for the players because they have been superb since the start of the season without getting their just rewards.”

Like Motherwell, St Johnstone have found goals hard to come by this season with four to their name in seven games now.

Strikers Michael O’Halloran, Callum Hendry and Stevie May all passed up chances, along with midfielder David Wotherspoon, mainly thanks to defensive errors.

Saints boss Callum Davidson is confident the goals will come for his team.

“Let’s just say it wasn’t the most attractive game of football,” he said. “When you get your chances you have got to take them. Motherwell took theirs.

“We gave them the opportunity to fight for something in the game. I did say that to the players, I want to make sure we are strong for the first 10 minutes and frustrate them. Unfortunately that didn’t happen.

“And then when we get our chances, you have got to take them.

“But I want the strikers in the right area. Michael, Callum and Stevie were all in the right areas. As long as they are getting in there, I won’t criticise them, and goals will come for them.”