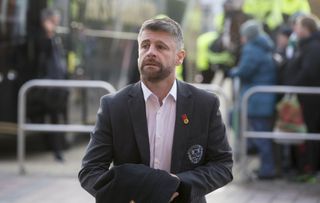 Motherwell boss Stephen Robinson is reading nothing into Hamilton’s wretched start to the season ahead of Saturday’s Lanarkshire derby.

Brian Rice’s side have started the Premiership campaign with three straight defeats and sit bottom of the table ahead of their trip to Fir Park.

Well, with two defeats and two draws so far, are looking for their first three points but Robinson knows they will have to work hard to get them against their neighbours.

“I’ve said that numerous times there’s nothing (between the teams) in this league, nothing at all.

“You seen the game last night (St Johnstone 0-1 Aberdeen), there’s nothing between the two sides, sometimes a bit of fortune or something goes your way.

“Accies have been exactly the same, they had good performances without getting the results.

“We won’t underestimate Brian or his team in any shape or form. We will have to be at our best to win the game.

“It is going to be a tough game. Any time you play Hamilton, nothing is easy. They don’t give you anything. You have to earn the right to play football.”

The Northern Irishman revealed he received some messages from back home after Glentoran clinched a Europa League qualifying tie against Motherwell next week with a 1-0 win over Torshavn in Belfast.

Former Northern Ireland assistant manager Robinson said: “I got a few last night but I’ve tried to ignore them all and concentrate solely on Saturday, and then we’ll start worrying about things on Sunday.

“I have probably worked with about 80/90 per cent of the players from Glentoran for the international set-ups and youth set-ups.

“Some of them have changed a wee bit, haircuts and got a bit bigger and things like that as well but I know a lot about them.

“I know that will be competitive and that it will be a physical game but there’s decent quality there as well.

“So, we will turn our attention to that on Saturday night, straight after the Accies game but first and foremost we are going out to win the game on Saturday.”