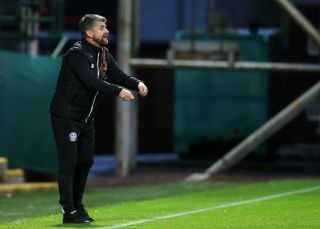 Motherwell manager Stephen Robinson admits their first Scottish Premiership win of the season will give his players a lift ahead of their second European qualifier – even if he was never worried about their slow start.

The victory was not enough to lift Robinson’s side off the bottom of the table but they are now just three points off fifth place and go into Thursday’s trip to Coleraine with a much-needed confidence boost.

Motherwell have played better and lost this season but Robinson admitted the victory would “subconsciously” life the weight off his men’s shoulders.

He added: “It certainly sets us up. It’s a huge game, which will be very tough against Coleraine.

“But we’ll be well prepared and if we could win on Thursday it would be three wins from four with the only loss against Celtic.

“We will have to approach the game in the same manner and the same work-rate and same desire, and our football will shine through.

“We’ll play better than we did but winning ugly is sometimes (what you need), you could see the atmosphere in the dressing room, the players enjoyed putting their bodies in front of the ball and dying to win a football match. That’s what you need to do.”

It was only the second league game out of seven that Motherwell have scored in.

“Winning football matches obviously eases pressure but there was a real belief that we’re a really good side,” Robinson said.

“Sometimes just a little bit of luck goes against you. I can say that now we’ve won. A lot of things went against us, penalties, penalties missed, injuries in key areas, which everyone suffers at some stage. We suffered it early on.

“We haven’t had the rub of the green, but we showed a different side of ourselves.

“We’re three points off fifth and I never thought there was any kind of crisis.”

St Johnstone have now lost three of their last four games 1-0 having had plenty of the ball in each of them. They also beat St Mirren 1-0 during that spell after utterly dominating.

They missed several decent chances at Fir Park and manager Callum Davidson is hoping to use the transfer market to improve his team’s fortunes.

“I hope so, we are working hard,” Davidson said. “Unfortunately it’s a long transfer window. There’s always players coming up and things to do.

“We will work hard to try and get one or two out and one or two in and hopefully we can improve.”

Davidson added: “We have performed really well this season. We have been getting into good areas and moving the ball really well. I thought we were just a little bit off it today.

“We are capable of better but you have to credit Motherwell, they sat in and frustrated us really well.”