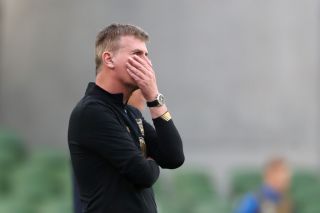 Stephen Kenny was left ruing his side’s lack of match sharpness and finishing touch as the Republic of Ireland fell to the first defeat of his reign as manager.

Ireland’s 1-0 loss to Finland in the Nations League marked a disappointing return of international football to Dublin after coronavirus lockdown.

The defeat, in front of a near-empty Aviva Stadium, came at the hands of Fredrik Jensen who fired a second-half winner from close range just 18 seconds after coming on as a substitute.

While Finland had more chances, only to be denied on a number of occasions by the solid Darren Randolph, it was Ireland who were left the more frustrated, after failing to capitalise on any of their opportunities.

“We need to finish better than we did. Taking your chances is absolutely critical, it changes the game. Aaron Connolly had two good chances at least, David McGoldrick actually had two chances, Callum Robinson had a great chance… Shane Duffy’s header was a much better chance than the one he scored last week, so we had a lot of chances.”

The defeat came after Kenny’s first game in charge saw his side snatch a point when Duffy headed home against Bulgaria late on in Sofia on Thursday.

The manager, whose sights are firmly on next month’s crunch Euro playoff away to Slovakia, admitted he adopted an experimental approach to team selection in his first two outings as national boss.

He insisted his players’ lack of match fitness was crucial, as he expressed hope they would get plenty of game time with their respective clubs before they reassemble for the Slovakia clash.

“The players are in pre-season, you could see it today,” he said.

“I think the midfield were pretty tired. If I had five subs I would have made two changes in the midfield and given them fresh legs.”

He added: “Match fitness was a factor in the two games. I think in a month’s time we’ll be a lot better. The players found the 90 minutes a tough 90 minutes.”

Ireland captain Duffy said he was “disappointed and frustrated” with the result.

“It’s not a nice feeling at the minute,” said the Celtic defender.

“There’s not much match games and match fitness between the lads and we’re trying to get up to speed in international games.

“There was a couple of mistakes tonight again, but you’ve just got to keep going with a strong mindset and hopefully we can get it right for the big one next month.”

Finland manager Markku Kanerva was delighted with his country’s first victory over Ireland after what he described as a “tight, even game”.

He said: “I’m very happy how my team defended today. We kept a clean sheet. Of course, Ireland had a couple of very good chances, as we did also.