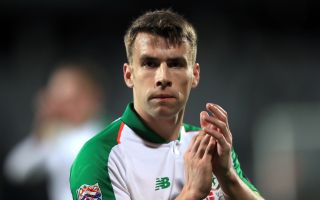 Stephen Kenny has admitted he had to make a “marginal” decision to leave “brilliant” skipper Seamus Coleman out of his first Republic of Ireland team.

The new manager selected Tottenham new boy Matt Doherty over Ireland’s long-established right-back for Thursday night’s Nations League opener in Bulgaria, in the process addressing a debate which has raged in Irish football as a result of the 28-year-old’s rise with Wolves in recent seasons.

Coleman, 31, was the man in possession under Martin O’Neill, while Mick McCarthy tried to crowbar both men into his team with limited success, but Kenny has bitten the bullet early in his reign and it would be no surprise if the younger man got the nod once again against Finland on Sunday.

He said: “It’s just one of those situations, that we have two of the better right-backs in the Premier League.

“Seamus Coleman has been such an exceptional player for Ireland, and he’s such a great ambassador for football in Ireland. But apart from that, he’s a quality player and he’s shown that this year.

“After the lockdown, he got himself in really good nick – as he always is – but he was injury-free then for that period and defended really, really well and got forward well.

“Matt Doherty has had a season where it’s gone brilliantly for him at Wolves. He’s played a phenomenal amount of games – Wolves had some season in terms of the number of games they had.

“It was such a high number and Matt played in nearly all of them. He got better and better and it’s culminated in him getting his move to Tottenham.

“They’ve both had good seasons and these are marginal decisions. Seamus is a brilliant captain, one of the best captains that we’ve ever had, that’s for sure.”

Kenny’s first team selection was bold as he threw in 19-year-old debutant Adam Idah in a youthful frontline alongside Aaron Connolly, 20, and Callum O’Dowda in Sofia, while there was a first cap in almost four years for Crystal Palace midfielder James McCarthy.

With many of his players effectively still in pre-season – Newcastle midfielder Jeff Hendrick played the full 90 minutes in is first competitive appearance since March – the manger has hinted that there will be changes for Sunday.

However, there is unlikely to be a start for Sheffield United striker David McGoldrick, the Republic’s International Player of the Year last season, despite his addition to the squad on its return from Bulgaria following a foot injury.

Kenny said: “It’s great to get him back in the squad. He’s had a good season with Sheffield United. He leads the line brilliantly, of course.

“The foot injury was problematic for him from the end of last season. It hampered his pre-season, so he’s only really had a week’s training, that’s his first week back training, if even. Less than that.

“He comes into the squad, but most likely not to start. It’s too soon for him. But he’s definitely in the squad.”

If Kenny’s immediate focus is on victory over Finland – Ireland, now in their second Nations League campaign, are yet to win a game – next month’s Euro 2020 play-off in Slovakia is the fixture which carries most importance.

He said: “Tomorrow’s game is important in its own right. We respect Finland – they’ve qualified for the Euros. They are where we want to be. They are in the Euros, that is our ambition to get there.”