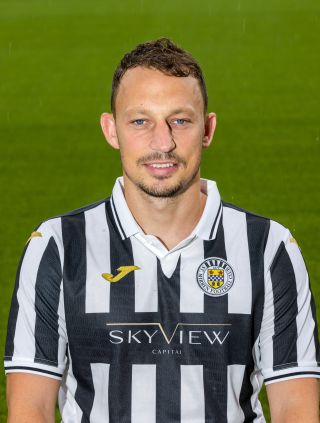 Kristian Dennis says he was sold on St Mirren after receiving some friendly advice from former Buddie Paul McGinn.

The 30-year-old striker has agreed a two-year deal with Saints after leaving Notts County.

Jim Goodwin will be hoping he can carry on a scoring record that has seen him net 109 career goals during spells with Macclesfield, Stockport, Chesterfield and the Magpies.

He previously played alongside McGinn at Chesterfield and revealed he turned to his former team-mate after being approached by Saints.

And it was the seal of approval from the now Hibernian full-back, whose brothers Stephen and John also starred in black and white, which helped make his mind up to move north.

Dennis, who left Meadow Lane this summer after the Magpies failed to win promotion back to the Football League following defeat in the National League play-off final at Wembley, told stmirren.com: “The gaffer was very welcoming when I came up last week and just really helpful. I felt wanted and it was a no brainer to come up.

“The club seem like they really want to progress in the league and I just thought it would be a new challenge.

“I messaged Paul McGinn and he had nothing but good things to say. I’m just really looking forward to getting involved and hopefully hit the ground running and score a few goals.

“My last game was at Wembley a few weeks ago but I’ll have a few days training this week and hopefully be ready for Saturday.”