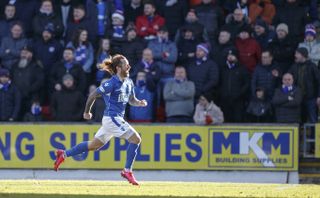 St Johnstone strikers Stevie May and Chris Kane are expected to return from lay-offs when Hibernian visit Perth.

Manager Callum Davidson has not given up hope of other players bolstering his squad.

Hibernian’s Steve Mallan could play a part after stepping up his recovery from a knee injury.

The former St Mirren midfielder has not featured so far this season but was involved through the week in a training ground bounce game and has now rejoined boss Jack Ross’ squad.

Drey Wright again sat out last week’s draw at home to Motherwell with a thigh strain and Ross admits he has a couple of unnamed injury concerns travel to Perth.