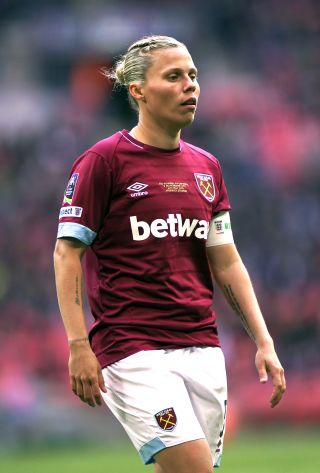 West Ham Women are looking forward to getting their new season under way this weekend – as a documentary is released looking back at their 2019-20 campaign.

The Hammers’ opening fixture of the 2020-21 Women’s Super League sees them play Tottenham away on Sunday.

Matt Beard’s side then host Arsenal six days later – their first match at their new home, Dagenham and Redbridge’s Chigwell Construction Stadium, and a fixture selected as one of the pilot events to test the return of spectators to sporting fixtures, with a maximum of 1,000 fans allowed into the ground.

West Ham, who went professional two years ago and were 2019 FA Cup runners-up, came eighth in the WSL last term.

The story of that season, which was brought to a premature end due to the coronavirus pandemic, is told in the forthcoming BBC documentary Squad Goals, a follow-up to the series Britain’s Youngest Football Boss.

He said: “I feel ready and I’m looking forward to another season.

“It’s been an absolute whirlwind. I think most teams during lockdown almost shut down, but we were the opposite – we’ve moved home, we’ve signed four new partners, we’ve signed lots of new players, Gilly (Flaherty, the club captain) renewed alongside a lot of other players.

“It’s been a huge summer for us. We’ve relished the challenge of it being a bit different, and we’re looking forward to welcoming fans back for the Arsenal game, which is going to be amazing.

“It’s an absolute privilege. I think we’re going to be the first competitive pro game to have fans back, which is just quite amazing really.”

Sullivan added: “I have literally been growing in front of the camera, but so has the team, and I think that’s what’s been really exciting.

Sullivan feels the series is “brutally honest and real” and said: “When we first did the documentary, it was to encourage new people to follow the women’s game. I’d like to think it’s opened eyes up hopefully to the inside workings of a women’s football team, and I think that’s really exciting.”

Flaherty said ahead of the Arsenal match: “We’re really excited to get going. All the girls are itching to get out there.

“I think the first year, for us to reach the FA Cup final probably put people’s expectations for the second season a lot higher than they should have been.

“Last year we didn’t have the greatest of seasons, it was very up and down and we lacked consistency. I think for us this year it’s making sure we are hard to break down and consistent with our results.”

Squad Goals includes footage of Flaherty’s interview from February on mental health when she revealed she had tried to take her own life when she was 17 and urged people to talk about their struggles.

Asked about that being part of the documentary, the 29-year-old defender said: “I felt very comfortable and that there was a real understanding, from my point of view, and a lot of empathy.

“It helped me (make) sharing my story become a lot easier. It is something that isn’t the easiest of things to share, but I feel it has worked well in the sense that with them doing the filming I’m now going to be able to impact a whole lot more people.”

:: A box set of BBC Three’s Squad Goals will be available via BBC iPlayer from Saturday, September 5. The series will also air weekly on Sunday evenings on BBC One, starting with episode one at 11pm on September 6.