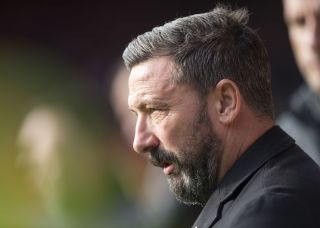 The Dons could not go into Thursday’s Europa League second qualifying round tie in Norway in better form, having won all five games since their opening day defeat to Rangers, conceding just two goals in the process.

Ross McCrorie was the hero against Kilmarnock on Saturday, steering a left-footed strike into the bottom corner for the only goal of the game.

However, McInnes faces having to change his team to meet the challenge ahead, with Tommie Hoban in particular posing a problem for his manager.

McInnes explained: “It’s going to be a tough game on a plastic pitch against a capable side, but that’s why we look forward to testing ourselves in Europe. The motivation for both sides is the prospect of facing Sporting Lisbon.

“There’ll be no surprises come kick-off – they like to play and they’re a capable team with a real attacking threat.

“It’ll be two decent teams playing against each other. We should be as we are for the trip.”

Hoban signed for the Dons as he completed his recovery from a cruciate ligament injury and is still getting back to full fitness, but has impressed in their defence.

McInnes added “Tommie’s not quite at the stage where he can have a two-day recovery. We have to manage his week, but he’s available for Thursday. That said, if he plays Thursday then he won’t be available for next Sunday.

“The improvement in his performances will come, but I’ve been really pleased with him and you can see why we’re keen to get him signed up again.”

Kilmarnock boss Alex Dyer feels his side are not far away from adding points to performances, but saw centre-backs Kirk Broadfoot and Clevid Dikamona withdrawn through injury at Pittodrie.

He hopes both will be available to face Hamilton next week and said: “Kirk has a dead leg but he’ll be OK, he’s a strong boy. It’s a bad one for him to come off, but hopefully he’ll be OK for next week.

“The same  goes for Clevid – I needed to make a quick substitution as he was on the ground, but it’s not a big thing.”