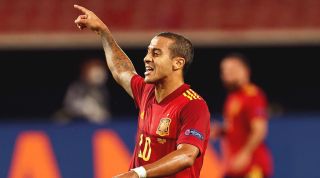 LATEST ODDS ON SPAIN VS SWITZERLAND

In the first match of the 2010 World Cup, these two sides met for the opening game of their group. Switzerland would nick all three points in the battle that day but Spain would win the war - turning around their form to lift their first-ever world title, in South Africa that summer.

Much has changed 10 years on - not least the footballing calendar, which now squeezes in Nations League fixtures where it can. Spain's golden generation has all but gone, while Switzerland have turned over a few new leaves since a decade ago.

Tonight's clash gives viewers a chance to see the new Spanish generation coming through, led by Liverpool midfielder Thiago among others. The likes of Adama Traore and Leeds United's Rodrigo are getting chances now in the side - this is a world away from the tiki-taka that ruled supreme under Vicente Del Bosque.

Switzerland also have their stars - though not as many as Spain. Their linchpin in the centre of midfield is Arsenal metronome Granit Xhaka and though the Swiss are always underfancied in tournaments, they did at least reach the final four of the Nations League last summer.

Kick-off is at 7.45pm BST and the game is being shown on Sky Sports Football in the UK. See below for watching details where you are.