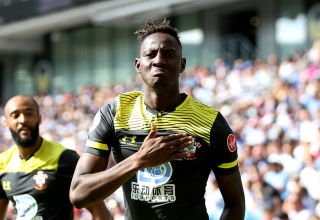 Moussa Djenepo remains sidelined as Southampton prepare to face Tottenham on Saturday, with boss Ralf Hasenhuttl saying it is not clear how long the Mali winger will be out for.

After scoring the winner in the 1-0 victory at Sheffield United, summer signing Djenepo has missed the 3-1 home loss to Bournemouth and 4-0 Carabao Cup win at Portsmouth on Tuesday due to a muscle issue.

Ahead of this weekend’s away clash against Spurs and former Saints boss Mauricio Pochettino, Hasenhuttl was quoted on Southampton’s official website as saying: “Only the long-term injured players, like Moussa Djenepo, are still out.

“Alex McCarthy has a little problem with his muscle. So maybe we take another goalkeeper at the weekend.

“We took a few new pictures (of Djenepo’s injury). There isn’t more to say. He’s still out. We don’t know how long but in the moment there is no chance to play for him.

“He’s had a very good impact in our team and everyone loves him. He’s a good guy and it isn’t easy for him in the moment. But that’s football.”

Hasenhuttl’s men are currently 13th in the Premier League, six places below Tottenham.

Meanwhile, Southampton have announced striker Dan N’Lundulu has agreed a two-year contract extension to keep him with the club until the summer of 2022.

The 20-year-old, yet to make his senior debut, has scored four times for the Under-23s this season and was part of the first-team matchday squad for 1-1 draw with Manchester United at St Mary’s in August.

“Being around the first-team just gives you motivation. You can feel it in the changing rooms, on the bench and warming up thinking you might come on – it’s pure motivation.

“That makes me want to work harder to be in that situation again and next time hopefully come on and do what I do well.”