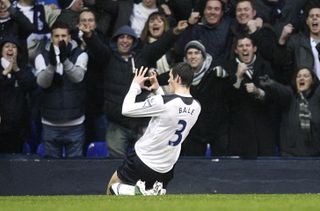 Gareth Bale has rejoined Tottenham on a season-long loan after spending seven years at Real Madrid.

Here, the PA news agency picks out five things you might not know about Bale’s career so far as he makes his dramatic return to the Premier League.

Bale will be hoping for better luck at the start of his second spell at Spurs than his first, when it took him 25 games and two years to register a Premier League win. Bale joined Spurs first time round as a promising 17-year-old left-back from Southampton for £10million in the summer of 2007. He did score on his second appearance, in a 3-3 draw with Fulham, but it was not until he came off the bench in a 5-0 victory over Burnley in September 2009 that he tasted victory in the Premier League.

Bale’s slow start at Spurs, which was compounded by knee and foot injuries, led to speculation the club may seek to cut their losses. In 2009 reports emerged linking him with a cut-price £3million move to Birmingham, whose manager Alex McLeish also explored the option of taking the player on loan. Nothing materialised as other injuries limited Spurs’ options and manager Harry Redknapp decided to keep faith in the youngster. It was a decision that paid off dramatically, leaving Birmingham to wonder what might have been.

Departed on top of the world

The Welshman’s career subsequently exploded. Knee surgery in the summer of 2009 proved successful and Bale went on to establish himself as an exhilarating left-sided midfielder. He announced himself on the grandest stage with a stunning Champions League hat-trick against Inter Milan in October 2010 and he backed that up with high-quality performances on a frequent basis. By 2013 he was being mentioned in the same breath as Lionel Messi and Cristiano Ronaldo and Real Madrid snapped him up for a then world record £85.3million. He left Spurs on a high after scoring 55 goals in 203 appearances – 26 of them in his final season – and winning the PFA Player of the Year award twice. The club will hope he picks up where he left off.

Bale has delivered at the highest level for Real, not least with his spectacular match-winning double in the 2018 Champions League final against Liverpool. That secured one of four European titles for the Welshman, who has also had a hand in two LaLiga title victories. Statistically, however, his greatest seasons were at Spurs. In his final two campaigns at Tottenham in 2011-12 and 2012-13 he played 3,218 and 2,925 and Premier League minutes respectively, and notched 21 goals in the latter. He has not matched those figures in Spain. In the last five years he has averaged just 1,571 LaLiga playing minutes per season – which equates to 46 per cent of available game time – with a best goal return of 19 in 2015-16. Last season his playing time dropped to just 1,092 minutes as he fell out of favour under Zinedine Zidane.

As Bale rattled in the goals in his previous spell at Tottenham, fans grew familiar with his ‘heart’ celebration. This saw Bale make the shape of a heart with his fingers after every strike. This started out as a simple romantic gesture to his then girlfriend – now wife – Emma Rhys-Jones, but it grew into something else. In 2013 it was reported he had trademarked the celebration, along with his shirt number, as the ‘Eleven of Hearts’ for a logo that could be used on personally-endorsed merchandise. It was claimed the move could net him millions a year.