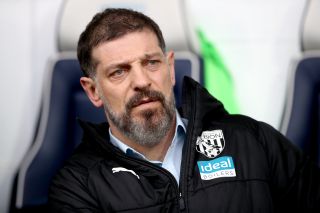 A few days have made all the difference for West Brom manager Slaven Bilic as he looks to guide his side back to the Premier League on Wednesday night.

Friday’s late 2-1 loss to Huddersfield left Bilic dejected, verbally conceding defeat to Brentford in the race for second place – but after the Bees squandered the opportunity with defeat at Stoke the following day, the Baggies once again have control of their own destiny.

Beat QPR and West Brom will be back in the Premier League, two years after an eight-year run in the top flight came to an end.

“Forget about Friday, now it is only Wednesday night,” Bilic said. “Home. Late night game. Everything is there. We need to come up, come out, show mentality, show intensity, all together and let’s finish the job.”

Should they fail to win, West Brom can surely not expect Brentford to let them off the hook a second time as the Bees face a Barnsley side two points adrift of safety, but who did give themselves hope with victory over play-off hopefuls Nottingham Forest on Sunday.

Thomas Frank has promised the Bees will not make a second mistake, but waiting over the shoulder of both teams are Fulham, now only two points from the automatic promotion places after defeat for the top two, coupled with their own 5-3 win over Sheffield Wednesday.

“Momentum is with us and this league throws up surprises,” Parker said after that game, eyeing one more twist in the tale.

But they too face a tricky final assignment, away to a Wigan side who sit in mid-table on paper but are in reality deep in the relegation scrap.

Hull, Barnsley and Luton occupy the bottom three places in the table, Luton level on points with Charlton above them and two adrift from Birmingham and Middlesbrough, but the reality of this strange season is far more complicated.

Wigan face a 12-point deduction after being placed into administration, which stands to drop them to 22nd place, above Barnsley only on goal difference.

The Latics have appealed, while there are further disciplinary cases outstanding against Derby and Sheffield Wednesday which could yet complicate the picture further and ensure a messy situation is far from resolved when the final whistles blow on Wednesday night.

Instead, the drama of a multi-layered relegation scrap was reduced to a rather dry statement from the Football League on Monday.

“In the specific case of Wednesday evening’s final round of Championship matches for season 2019-20, and any potential impact on divisional standings, relegation will be confirmed for the clubs in 22nd, 23rd and 24th positions in the Championship table following the conclusion of those matches and will be subject to the resolution of any ongoing proceedings,” that statement said.

Before the legal battles, everyone will get a chance to improve their standings on the pitch.

Luton host Blackburn while Charlton, currently clear of trouble on goal difference alone, face newly-crowned champions Leeds, meaning Lee Bowyer could yet be sent down by his old employers.

Hull, bottom of the table and three points from 21st place, travel to Cardiff, who need at least a point to keep rivals Swansea at bay in the battle for play-off places. The Swans head to Reading sitting in seventh, three points behind both Cardiff and Forest, who are at home to Stoke.

Huddersfield, managerless since the shock sacking of Danny Cowley on Sunday, are on the verge of appointing Leeds assistant Carlos Corberan, though nothing will be done before they head to Millwall, while Bristol City finish up against Preston.