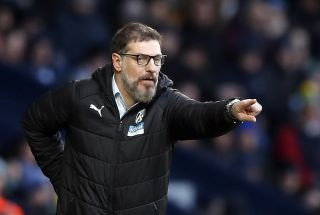 Slaven Bilic insists West Brom will try to do more than merely survive in the Premier League this season.

The Baggies are back in the top flight after securing promotion with a second-placed finish in the Sky Bet Championship, despite a jittery run-in.

Having only just got over the promotion line, many pundits are predicting that Bilic’s side will struggle and go straight back down.

However, the Baggies boss insists he will use such words as motivation for his squad for them to prove they belong in the Premier League.

“We are very proud to be in the Premier League – we deserve to be there,” said Bilic. “Now we want to stay there, of course.

“The first task for any promoted team is, of course, to stay up and to secure that status for the following season.

“But we don’t want to compete as a Championship side who is going to try and do something in the Premier League. We are going to compete as a very confident side that expects to stay in the league for a long time.

“People are tipping West Brom to go down. It’s great to be in that situation, in a sense that ‘let’s show them, let’s show them that they’re all wrong.’

“That is why I, and the players also, treat that as a positive. We have even bigger motivation now to show those people they are wrong.”

Bilic also invoked examples of recently promoted teams that can provide West Brom with some heart.

“I bet that when you talked to Sheffield United before the start of last season, they said their first objective was to stay up. But when they got momentum, they didn’t say ‘we’re happy now’,” said the Croatian, whose side host Leicester at The Hawthorns on Sunday.

“You have to be humble, positive and well balanced. We only think positive things. We don’t think about Norwich, we think about Sheffield United and also Aston Villa, who were fighting until the last day of the season.

“There are many positive examples in every league every year. We want to be like them.

“For that you have to have the right quality, the right mentality and, most of all, you have to believe. Because if you don’t believe, then what is the point? We believe.”

Kenneth Zohore and Conor Townsend are injury concerns ahead of the visit of Leicester.

Both players have missed games during Albion’s pre-season preparations – Zohore with a calf issue and Townsend due to an ankle problem.

Zohore will not be fit for Sunday’s opener but Townsend has been training this week and could be involved.

Bilic expects the club to sign former Chelsea defender Branislav Ivanovic ahead of the match but the veteran is short of match fitness and will not figure against the Foxes.