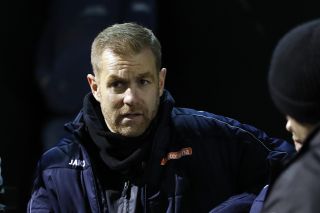 Harrogate boss Simon Weaver has targeted a winning start to life in the English Football League.

The North Yorkshire club play their first Sky Bet League Two game at Southend on Saturday, less than six weeks after winning promotion to the top four divisions for the first time.

It will be a landmark day in Town’s 106-year history, but Weaver holds no fears his players will be over-awed.

“Everyone is pretty level-headed,” Weaver told the PA news agency. “We know it’s going to be a long season and we’re playing for three points.

“Every individual on the bus is very competitive. We want to win as many games as possible, starting tomorrow.”

They lost out in another penalty shoot-out to Grimsby this week in the EFL Trophy, but Weaver has taken heart.

“We’ve had two games against league sides now where we have been competitive and have looked good,” he said.

“We know it’s a big occasion in our history, but we’re really quite well-balanced about it.

“There will be 46-plus games this season and we don’t want to start getting over-excited so we tire ourselves out with nervous energy.”

Town held their nerve throughout last season’s promotion push, finishing second to Barrow when the season was suspended in March due to coronavirus before seeing off Boreham Wood and County in the play-offs.

“It’s not long ago that we were travelling down the road to Wembley and everyone was saying that was the biggest game in our history,” Weaver added.

“We have taken a lot of confidence from showing we can rise to the occasion and this is another one.

“We’ll be placing exactly the same demands on the players again, but they’re used to the pressure situations now.”

Town’s four summer signings  – Jake Lawlor, Connor Kirby, Tom Walker and Kevin Lokko – have all been included in the squad.

Joe Cracknell will continue in goal in place of James Belshaw (fractured thumb), but otherwise Weaver has a fully-fit squad to choose from.