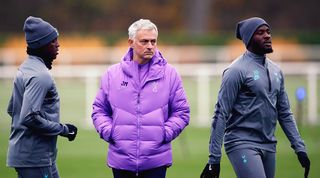 Jose Mourinho is taking no risks for his side’s trip to North Macedonia after selecting a full-strength squad for the single-leg Europa League third qualifying round clash.

Spurs defeated Lokomotiv Plovdiv last week, their first step on the road to the group stages, but still have to battle through another two qualifiers.

And after an uncomfortable night in Bulgaria, where Mourinho’s side needed two goals in the final 10 minutes to come back from a goal down and seal victory, they will be wary of complacency.

"We took it very seriously in Bulgaria, but even so, we weren't very far away from an unhappy night," Mourinho said.

"For the game tomorrow, we didn't need that experience, but maybe it helps, because we know how tricky this can be.”

Spurs were due to face Leyton Orient in the Carabao Cup on Tuesday night, but the game was called off after several players at the League Two side tested positive for COVID-19.

But Mourinho insisted that he hasn’t altered his selection plans on the back of getting some extra time off.

"The team that was supposed to play last night is different to the team tomorrow," he said.

"The main reason is that we played last Sunday at Southampton and one thing is Sunday, Tuesday and another is Sunday, Thursday.

"So this is a normal situation for a football player of this level to have three days rest and to play again on Thursday."

Spurs secured the signing of Sergio Reguilon and a loan deal for Gareth Bale from Real Madrid this week, but neither player will feature in Skopje.

Shkendija have already knocked out Azerbaijan’s Sumqayit and Botosani of Romania in the opening two rounds of their Europa League campaign, but they have never made it as far as the group stages.

Russians Rostov or Israel’s Maccabi Haifa await for the winners in the play-off round.

Kick-off is at 7pm BST and the game is being shown on Premier Sports 1 in the UK. See below for watching details where you are.

WATCH THIS GAME Get a Premier Sports pass here