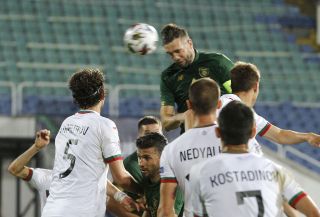 Shane Duffy thanked Robbie Brady for handing him the chance to redeem himself after the Republic of Ireland struck late to snatch a Nations League draw in Bulgaria.

The 28-year-old defender, who completed a loan move from Brighton to Celtic earlier this week, was at fault as the Bulgarians took a 56th-minute lead through Bozhidar Kraev at the Vasil Levski Stadium in Sofia on Thursday evening.

However, he atoned for his earlier error with a headed equaliser from substitute Brady’s corner in the third minute of stoppage time – his fourth international goal – to ensure Stephen Kenny’s first game as manager ended 1-1.

Asked about his late intervention, Duffy said with a smile: “It was nice to get it, but I’d rather have played better, to be honest.

“I fancy myself every game, if the delivery is right. I had a few chances. I knew when Robbie came on I was going to get a chance from him. He’s got a wand of a left foot.

“He knows where I like it. He stuck it on my head and put it in.”

There were positives and negatives in Bulgaria as Kenny’s new-look team – 19-year-old Norwich striker Adam Idah was asked to spearhead a three-man frontline on his senior international debut – attempted to implement the new manager’s philosophy after only a few days together on the training pitch.

Ireland are yet to win a Nations League game after five attempts now, but they will get another chance when Finland, who lost 1-0 at home to Wales, head for Dublin on Sunday.

Reflecting on an a match in which he earned his first competitive start since June 30, Duffy said: “We haven’t had many games and we were straight into an international game, so it was tough on some of the lads. Personally, I haven’t played in a long time, so it was tough.

“We have got to keep going, recover and try to get the three points on Sunday.”

Among the positives was the performance of Bristol City’s Callum O’Dowda, who lined up on the right side of the front three and did his best to justify Kenny’s faith in him.

O’Dowda, who was disappointed not to score from a first-half Enda Stevens pull-back, said: “That’s what I wanted to do, I wanted to repay that back, not only to him, but all the Ireland fans back home.

“It was a tough game. Credit to Bulgaria, they were well drilled, their shape was tough to break down and these games are never easy.

“But there were a lot of positives. We could have been a bit more clinical in both boxes – I had one from Enda’s pull-back.

“But listen, on refection, if we can get a good performance on Sunday and three points, then you’d take four points from two games.”