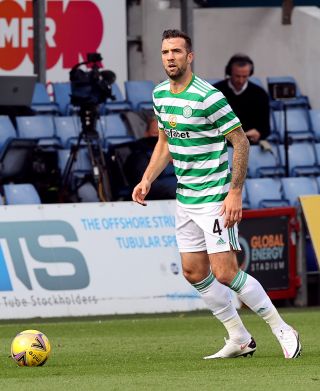 Shane Duffy promised Celtic fans there was more to come after his scoring debut in the 5-0 Premiership win over Ross County.

An early Odsonne Edouard penalty and a poacher’s goal from Albian Ajeti, the Switzerland striker who was making his first Celtic start, had the visitors two goals up by the interval  in Dingwall against a side who caused plenty of problems for the champions.

Debutant Duffy, the Republic of Ireland defender and life-long Celtic fan who signed on loan from Brighton, headed in from a Callum McGregor corner to ensure a comfortable last half-hour.

Fellow defender Kristoffer Ajer grabbed a fourth from close range before substitute Patryk Klimala fired in to keep the champions six points behind leaders Rangers with two games in hand.

Duffy, who  played a club game for the first time since July, believes more matches can only help him as he looked forward to facing St Mirren in Paisley on Wednesday night.

He said: “Yeah, it’s really still pre-season for me, that’s my third game. I had two for Ireland and now this.

“I’ll only get better. I know I play my best when there’s a run of games.

“I’m delighted there’s a lot of games, hopefully I keep my spot, I know the more games I play I’ll get fitter and sharper on the ball.”

He told CelticTV: “I am delighted. I think he probably needed a game like that to get his Celtic career up and going because he has looked assured and comfortable.

“He showed his qualities so he can be really pleased with that as we are.

“I thought we were little bit slow in the first half but the second half we were a lot better.

“Albian, starting for the first time, it was a good striker’s goal so it augurs well for the season.”