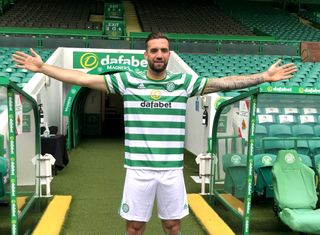 Shane Duffy admits he feared his chance to sign for boyhood heroes Celtic had slipped by.

The Brighton defender has joined the Scottish champions on a year-long loan. Y
et the 28-year-old revealed he saw an earlier opportunity to sign for ex-Parkhead boss Brendan Rodgers fall through as he prepared to leave former club Blackburn back in 2016.

Thankfully for Duffy, fate has smiled on him and he has been handed a second shot at making the move to Parkhead by boss Neil Lennon.

Now he aims to squeeze everything out of the experience and help lead the Hoops to 10-in-a-row.

The Republic of Ireland centre-back said as he was unveiled at Celtic Park: “There was talks a couple of years ago under Brendan but nothing really came from it and I ended up going to Brighton then.

“You always fear (the chance to sign had slipped away). Listen, it’s a huge club and you can’t just decide when you’re going to play for Celtic.

“They have got to want you as well and I’m delighted they wanted me and showed such interest in me. That’s another big factor in why I’m here.

“You always fear it might not happen but I always have that belief and I believe I can keep progressing in my career.”

Duffy spent his schoolboy days in his native Derry running through the streets sporting the Hoops.

He will get the chance to live out that life-long held ambition when Lennon’s team travel to Tannadice for Saturday’s clash with Dundee United.

But the former Everton youngster knows he has a long way to go to match up to the feats of the players he idolised growing up.

Asked which former Celtic players had inspired him as a child, he shot back with a grin: “Big Bobo!

“I’ve followed Celtic all my life. I was lucky to be managed by Alan Stubbs at Everton. I used to do his head in asking questions every day.

“There’s been loads over the years. You’ve got Henrik Larsson’s years and I had the pleasure of making my debut for Ireland under Martin O’Neill.

“They are icons at this place but there will be a lot of work to do to put myself in that category.

“Listen I haven’t even played a minute yet for the club so I just have to concentrate on myself and take it game at a time. Hopefully at the end of the season it will be all worth it and we’ll have those trophies.”

While he will join a dressing room bursting at the seams with medals, Duffy has yet to have his palm crossed with silver.

But he hopes that search for trophies will soon be at an end, saying: “I feel I’ve got this mentality of never giving up. I want to be a winner.

“I know they have a lot of winning mentality here so I have to bounce off that as well.

“Of course (a winners medal is something I’m desperate to get my hands on before I finish my career) and especially as I’m here now.

“The club has obviously done nine in a row so you would feel unlucky if you came in here and didn’t get it.

“But I’ve got the attitude of coming here to win and I’ll never give up.

“Winning something is huge for me. Everyone knows this is a huge year for the club and it was a massive reason for me to come this year too and try to get the 10.

“But I’m not stupid. I know it’s going to be difficult but also really exciting.”