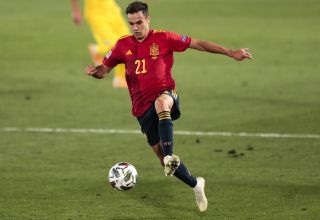 Tottenham have completed the signing of left-back Sergio Reguilon from Real Madrid.

The 23-year-old has signed a contract until 2025 and moves for an undisclosed fee but with a £27.5million buy-back clause.

Having come through the youth system at Real, Reguilon went on to make 22 appearances for the first team and won his first cap for Spain earlier this month.

✍️ We are delighted to announce the signing of Sergio Reguilón from Real Madrid!#HolaReguilón ⚪️ #COYSpic.twitter.com/XYBxS4w4Sd— Tottenham Hotspur (@SpursOfficial) September 19, 2020

Speaking on Tottenham’s Twitter feed, Reguilon said: “I’m very happy to be here. I really like the philosophy of the club and the coach, those were the things that made me want to come here. The desire to grow, the vision of the club and I’m eager to grow as a player.

Reguilon’s signing will inevitably be overshadowed by the confirmation also on Saturday that Gareth Bale has returned to north London on a season-long loan from Real.

“I talked a lot with Bale regarding everything: the club, the city, the new stadium,” said Reguilon. “I can’t wait to start with my team-mates.”

Reguilon spent last season on loan at Sevilla and had an impressive campaign, making 38 appearances as the club finished fourth in LaLiga and won the Europa League.

Real manager Zinedine Zidane told the club’s website: “I want to take the opportunity to congratulate Reguilon for the season that he had.

“He’s a Real Madrid player and he had the chance to go out and play. We’ve got two players in every position and I’ve got two full-backs.

“What I can’t have is three or four because then it becomes a problem. I wish Reguilon all the very best because he had a good season at Sevilla and deserves to now go and join Tottenham.”