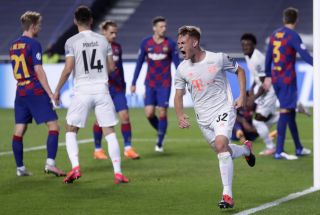 Striker Serge Gnabry insists there will be no complacency from Bayern Munich as they face Lyon for a place in the Champions League final.

The German giants are now the overwhelming favourites to win the reformatted mini-tournament in Portugal after powering into the semi-finals by thrashing Barcelona 8-2 last week.

Their next opponents are the unfancied French side who finished seventh in Ligue 1 this year, but after Les Gones’ victories over Juventus and Manchester City, Gnabry is taking nothing for granted.

The former Arsenal player, who scored one of the eight against Barca, said: “If you look at the match against Barcelona then, yes, it was an exclamation mark – everyone heard about this result.

“But this a different match. It is a semi-final. They’ll be well prepared, it will be no walk in the park. We have to focus and be ready from the first minute.

“Every single player was surprised by the result (against Barcelona), we couldn’t believe it, but we want to achieve more. We want to win.”

Bayern are chasing their sixth European crown and their first since 2013.

🗣️ #Flick: "I'm very impressed with the team. We have a strong team spirit and the quality in training is very high. That gives you confidence in the team. I'm relaxed because I know that the team are extremely focused and have big ambitions." #MissionLis6on#OLFCB#packmaspic.twitter.com/JKVq6Jnlpu— FC Bayern English (@FCBayernEN) August 18, 2020

Coach Hans-Dieter Flick, who has already guided the Bavarians to a Bundesliga and cup double this year, is determined to maintain the momentum.

Flick said at a press conference: “I am relaxed because I know my team is greatly focused and have great objectives.

“But we all know it is one match which starts at 0-0 and we have to play 90 minutes with the same drive and intensity as we did against Barcelona.”

Lyon’s victory over City took them into the semi-finals for only the second time in their history after their loss to Bayern at the last-four stage in 2010.

Rudi Garcia’s side are rank outsiders but striker Maxwel Cornet, who scored the opener against City, is enjoying the ride.

The Ivory Coast international told uefa.com: “We’ve knocked out some really big teams, the likes of Juventus and Manchester City. That shows we’re every bit as good as those teams.

“We mustn’t get carried away, we have to keep our feet on the ground and continue to work hard. The most important thing is to focus on ourselves.

“We’re making the most of the moment. We’re going to give our all out there again and, of course, we’re still hungry.”