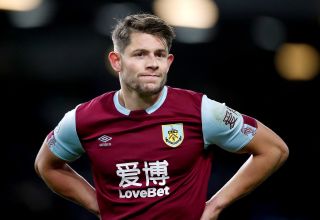 Sean Dyche was tight-lipped about speculation linking James Tarkowski with West Ham but the Burnley boss and club captain Ben Mee admitted their astonishment at the centre-half’s continued absence from England duty.

Dyche did not confirm whether a bid had been lodged for Tarkowski, although rumours are swirling that the Hammers will need to almost double a reported £27million fee in order to capture the highly-rated defender.

While he accepts every player has a price, Dyche will only begrudgingly let one of his star performers leave Turf Moor if that valuation is met as he insists the club are under no pressure to offload anyone.

“The club is in a very, very strong position so there’s no overwhelming desire to be selling players,” Dyche said at the club’s virtual media day on Tuesday.

“Do players have a price at any club? Yes, we’ve seen that across the whole of football. Eventually a day comes if someone’s going to hit a certain number then all clubs – not just Burnley Football Club – have to make a decision.

“If that comes then the chairman will make that decision. I don’t control those moments, the chairman does and the board, so we’ll have to wait and see but it’s fair to say we’re in a very strong position.

“Until that level is met then I’ve got no other thought than James Tarkowski and other players here will still be here operating for us.

“We’re not in the business of getting rid of our best players on the cheap, that’s for sure.”

Tarkowski said earlier this week he feels “forgotten about” after being left out of England’s squad for the Nations League fixtures against Iceland and Denmark.

It has been two years since the 27-year-old represented England for the second and final time and, even when Harry Maguire was stood down recently, Gareth Southgate instead plumped for Wolves captain Conor Coady as a replacement.

“With Tarky, on this occasion I’m quite amazed he was not in the England squad,” Dyche added.

Having formed a dependable partnership alongside Tarkowski at the heart of Burnley’s back-line, Mee is well positioned to comment on his team-mate’s England snub.

“For me Tarky last year was head and shoulders above most of the England centre-halves and players, he should be in there all day long,” Mee said.

“I know he’s disappointed not to be in the England squad and I was disappointed for him. Going off form and ability he’s right up there.”

Before forming a successful union with Tarkowski, Mee flourished alongside Michael Keane, who moved to Everton in the summer of 2017 for an initial £25m fee.

Keane’s departure to Merseyside ensured Tarkowski became a regular starter nearly 18 months after joining Burnley from Brentford, and he was one of 15 people to play every minute in the top-flight last season.

Mee hopes his alliance with Tarkowski continues into the upcoming 2020/21 campaign, adding: “We want to keep him at the club as long as possible, he’s a top-class player and I enjoy playing with him.”

While Burnley have signed goalkeeper Will Norris to offset the loss of Joe Hart, they are short on numbers with the midfielders Jeff Hendrick and Aaron Lennon departing and defender Ben Gibson joining Norwich on loan.

“It’s quite clear and quite evident that we need people in, we lost a few last season so we definitely need people in. We’re trying to affect that,” Dyche said.

Ashley Barnes has returned to training following a hernia operation but Jack Cork is still working his way back to fitness after ankle surgery, while Mee has a niggle in his thigh.

Mee would not be drawn on whether he would be fit for Burnley’s top-flight opener at Leicester on September 19, saying: “I’m doing my best and trying to get back involved.”