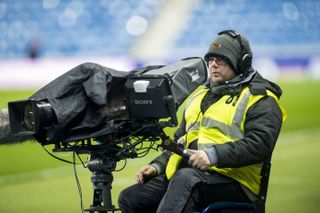 Scottish Premiership clubs have been given the green light to stream home games on a pay-per-view basis.

Season-ticket holders had been the only supporters guaranteed to be able to watch the home games of their team while games are played behind closed doors or limited capacity during the coronavirus pandemic.

The decision by the Scottish Professional Football League to show individual matches follows an agreement with Sky Sports. Games shown live by the broadcaster exempt from the arrangement.

The move will allow supporters to watch their team on their travels but a decision on any game will rest with the home club.

Starting from this Saturday tune into DUTV for £12.50 a ticket as Clubs have been given the green light to stream all non-Sky broadcast Scottish Premiership matches on a pay-per-view basis.— Dundee United FC (@dundeeunitedfc) July 27, 2020

Dundee United have already announced that their top-flight return against St Johnstone at Tannadice on Saturday will be available for all fans to watch on a one-off basis for £12.50.

Motherwell also intend to show Fir Park encounters for £12 – their season ticket holders will also get access to streams as well as getting 19 home games from the day supporters are allowed back in grounds.

St Johnstone have set a price of £17.50 and Livingston £20 to protect the value of their season tickets, while Kilmarnock and St Mirren are both pricing their one-off games at £12.50.

Aberdeen will review the situation after their opener against Rangers, which is being shown by Sky, and are trying to sell out their allocation of 9,000 season tickets, which is based on their estimated social-distancing capacity.

🆕 Ahead of Saturday's season opener, we're able to confirm that we will be showing selected home games to Hibernian supporters on a pay per view basis.— Hibernian FC (@HibernianFC) July 27, 2020

Ross County are also taking time to consider their approach while Hibernian will show some games on pay-per-view but not their season opener against Kilmarnock. Subsequent home games against Motherwell and Aberdeen will be screened by Sky and their next Easter Road match is against Rangers, which is likely to be selected by the TV company too.

Hibs chief executive Leeann Dempster said: “Season ticket income is vital to the health of Hibernian and we want to protect the value of those packages, recognising the commitment made by those who have already signed up.

“We also want to give all of our fans the chance to see the team, and we will make selected games available throughout the season.”

Rangers, Celtic and Hamilton did not make any immediate announcements like the rest of their Premiership colleagues but Accies had already decided not to sell season tickets this year.

💻| Pay-Per-View will be available for ALL (home & away) games APART from those that are being broadcast live on Sky Sports.— Livingston FC (@LiviFCOfficial) July 27, 2020

Meanwhile, Scottish Championship rivals Dunfermline and Alloa have announced a “working partnership” as they bid to share resources and facilities to meet the challenges of the coronavirus pandemic.

Dunfermline will use the artificial surface at Alloa’s Indodrill Stadium as their training facility, with both squads keeping their changing facilities and storage separate.

The two clubs also have an understanding that they can use each other’s ground for games if either is out of commission for any reason.

The pair are reviewing other costs related to Covid-19 that they could share and would not rule out other neighbouring clubs joining their pact.

#DAFC and @AlloaAthleticFC are both delighted to announce a working partnership for season 2020-21 🤝— Dunfermline Athletic (@officialdafc) July 27, 2020

Alloa chairman Mike Mulraney said: “We are convinced that this agreement shows that in these difficult times clubs can work together to ensure that we all not only survive, but can learn new ways to thrive even in the most difficult of circumstances, building resilience for both clubs will be only one of the very positive outcomes achieved.

Dunfermline chairman Ross McArthur added: “I see this as a good new story of two clubs, in close proximity, working closely together for each other’s benefit.

“From DAFC’s perspective, it also provides us with certainty, as using a facility operated by a local authority next season could be extremely challenging on a number of fronts.”