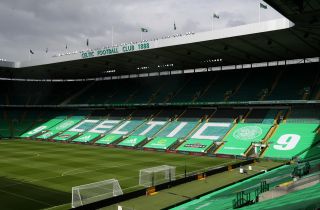 Proposals to allow Celtic’s home match against Motherwell on Sunday to go ahead with fans in the stadium have been rejected by the Scottish Government.

Celtic boss Neil Lennon confirmed last week that the Hoops were “collaborating” with the government on plans for the game to be used as a pilot for a return to live spectator sport.

Parkhead chiefs were hoping to welcome as many as 1,400 supporters through the turnstiles for the Scottish Premiership fixture.

But the Scottish Government said it needed “sufficient time for any test events to be informed by learning from other events”.

Around 700 rugby fans will be allowed into Murrayfield on Friday when Edinburgh host Glasgow Warriors in Guinness PRO14 action, while Brighton’s pre-season friendly against fellow Premier League outfit Chelsea on Saturday is among several sporting events which will welcome a limited number of spectators over the coming weeks in England.

First Minister Nicola Sturgeon has already set out an “indicative date” of September 14 for the reopening of Scotland’s stadiums.

A Scottish Government spokesman said: “A lot of work has gone on behind the scenes during these past months to create the protocols and testing regimes to allow top-level professional sport in Scotland to resume, without putting the public or others at unnecessary risk.

“We recognise there is disappointment that the proposal for a pilot on August 30 has not been approved but we are looking for suitable alternative dates for football pilots.

“We need to allow sufficient time for any test events to be informed by learning from other events – in particular the rugby match at Murrayfield on August 28.”

The Scottish football authorities are looking for clarification over why the decision was taken.

A spokesperson for the Joint Response Group said: “We note the decision and are seeking urgent clarification from the Scottish Government.

“We can only assume that the Scottish Government regard a single pilot event as appropriate for both rugby and football, ahead of the return of fans from 14 September, and look forward to that clarification as soon as possible.”

Responding to the news, Motherwell boss Stephen Robinson said: “I don’t know the ins and outs of it, so it would be wrong of me to say too much on it.

“We’re just desperate to have fans back. If the government have got a reason for doing it, I’m sure it’s a genuine reason.

“They have supported everything to do with football so far and if there is a reason for not doing it then they must have a genuine belief that this is not right yet. But the sooner we can do it, the better.”

Celtic may have been dashed on their hopes to invite fans back into Celtic Park this weekend but Ross County say they are stepping up plans to open up their terraces.

In a statement, the Dingwall outfit said: “Ross County can confirm that following the advice and guidance from the Scottish Government and Football Authorities, we have now started to undertake the review and planning for the return of fans to the Global Energy Stadium.

“The Scottish Government had already provided an outlined date in mid-September for test events with crowds in Scotland. We can confirm that we, Ross County, have put ourselves forward as a test venue.

“There is no doubt that given our club’s ability to react to the pandemic in the beginning and diligent and extensive work carried out by our operational team, that we feel we have a group of staff with the capability to deliver a return for fans to our stadium in a safe and secure environment.”

Meanwhile, the Joint Response Group has announced there have been no positive results for coronavirus following the latest round of testing.

A total of 1,345 players from across the Premiership as well as Hearts and Glasgow City were tested between August 17 and 23, with all results returning negative for Covid-19.