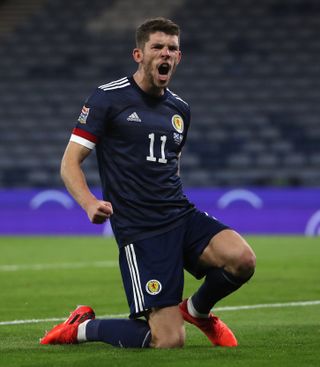 Scotland let slip a lead to draw 1-1 with Israel in their Nations League group opener at Hampden Park.

The home side broke the deadlock a minute from the break with a Ryan Christie penalty, moments after a crucial save from keeper David Marshall.

The second half was as hard-fought as the first with Eran Zahavi firing in the deserved equaliser in the 73rd minute and Scotland had nothing much in response.

As a dress rehearsal for next month’s play-off semi-final against Israel at the same venue it revealed improvement is required.

As an opening gambit in this Nations League campaign, it provided food for thought for boss Steve Clarke who tinkered with his tactics and who may have a rethink before Monday’s game against Czech Republic in Olomouc.

Pre-match discussions centred around the prospect of Lyndon Dykes making his debut and where Kieran Tierney, available for the first time since Clarke took over, would fit in beside skipper Andrew Robertson.

As it transpired the QPR striker, who opted for Scotland over Australia, where he was born, led the line – and he could have been pleased with his performance before he was replaced – and Tierney began in a three-man defence along with Scott McTominay and Scott McKenna.

Liverpool defender Robertson and James Forrest, who scored a hat-trick in the 3-2 win against Israel at Hampden in their last meeting, were installed as wing-backs.

Celtic duo Nir Bitton and Hatem Elhamed and Hibernian keeper Ofir Marciano started for Willi Ruttensteiner’s side who gave as good as they got in the early stages with midfielder Manor Solomon looking lively.

Inside an eerie national stadium bereft of the Tartan Army, Scotland had spells of crisp passing amid good possession.

However, the first save made was by Marshall in the 34th minute when he gathered a decent long-range effort by Dor Peretz then made fantastic block from Munas Dabbur’s header from six yards, before Scotland took the lead.

Referee Slavko Vincic judged that McGinn was fouled by Eytan Tibi as he went for a Dykes header inside the box – an earlier claim when the midfielder went down in a challenge perhaps had more merit.

Christie, with the Scots first shot on target, slammed the spot kick high past Marciano which must have changed Clarke’s half-time team talk.

Scotland looked enthused at the start of the second half, Christie especially, but Israel were far from out of it.

In the 70th minute a terrific cross by Israel right-back Eli Dasa found no takers.

The warning was not heeded. Minutes later Zahavi combined with Dabbur and burst into the Scotland box before rifling the ball high past Marshall.

Oli Burke immediately replaced Dykes and then Stuart Armstrong took over from McGinn.

But Israel looked the most likely to get the next goal and in the end, Scotland can have no complaints.