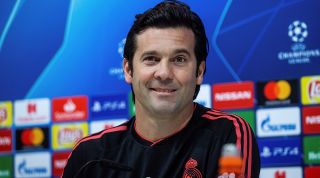 Solari was sacked by Madrid last season, and was replaced by the returning Zinedine Zidane.

The Argentine manager bore the brunt of los Blancos' first season without Cristiano Ronaldo and paid the price for a miserable run of results that followed – including their humbling Champions League exit to Ajax.

However, after a break from the game, Solari is now looking to make a return - and likes the look of the Premier League.

"I saw the Premier League last year and how it grew so much. It was a fantastic campaign for the English teams," he told the BBC.

"There are so many different cultures as well - you have Spanish coaches, German coaches, English coaches, coaches from all over the world who have made it grow.

Solari has particular admiration for Manchester City's Pep Guardiola and Tottenham's Mauricio Pochettino, who are successful examples of foreign bosses competing in England.

Solari and Pochettino are both from the Santa Fe province in Argentina, although the former admits that they don't know one another.

"I am not friends with him but I know him [his work] and I admire him for what he has done last year and the year before," said Solari.

"It didn't just happen that he got to the final of the Champions League - it was something that was growing over four or five years."

Solari says Guardiola and Pochettino are not too similar.

"I don't think we can put them in the same package," he said. "They have coached different teams.

"I would like to see Pochettino with one of the really big teams soon because he deserves the opportunity.

The 10 most surprising managerial appointments in Premier League history