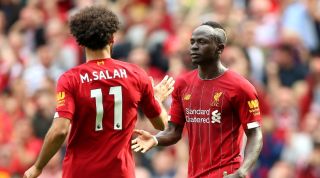 Jamie Carragher believes Sadio Mane’s anger at Mohamed Salah during a recent game was the result of a long-running frustration with the Egyptian.

The winger was annoyed when Salah failed to pass to him towards the end of a 3-0 victory over Burnley in the Premier League in August.

Mane was taken off by Liverpool manager Jurgen Klopp and could be seen shouting at his team-mates on the bench as James Milner tried to calm him down.

Carragher touched on the incident on the back of an on-pitch argument between Aston Villa team-mates Tyrone Mings and Anwar El Ghazi in the 0-0 draw with West Ham on Monday.

“There is no way Mane lost his head solely because he did not receive a few passes against Burnley,” the former Liverpool defender wrote in the Telegraph.

“His frustration will have been gathering for months, ensuring it only needed a trigger to bring it into the open.

"Jurgen Klopp is not a manager who allows his players to dwell on any negative issue so I strongly suspect he will have discussed it with both players.

"Ironically, I felt Mane was too unselfish in the Champions League game against Napoli in midweek, trying to pass to Salah when he should have been going alone.

"So long as these disagreements are isolated and issues swiftly resolved they do not cause a problem.

“Where managers do become wary is if cliques form, sides are taken and personalities clash to such an extreme it becomes detrimental to the unity and spirit within the camp."

Carragher also argued that, like in any working environment, it is unlikely that everyone in a squad will be best friends.

“After the Mings-El Ghazi spat I heard some pundits suggest these incidents ‘happen on the training ground every week’,” he said.

“They do not and it would be a disciplinary problem if that was the case.

“Equally, it would be strange if footballers who see each other every day did not have the occasional release of tension.

“Managers are trying to build a team from the best talent, not best friends.”