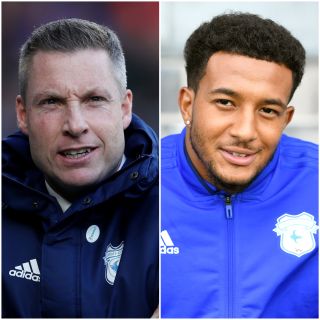 Cardiff manager Neil Harris says he feels comfortable over the sacking of Nathaniel Mendez-Laing despite the disruption to his playing squad on the eve of the new Sky Bet Championship season.

Mendez-Laing had his contract terminated by the Welsh club on Wednesday, just three days before Cardiff’s opening league game at home to Sheffield Wednesday.

No specific reason has been given for the departure of the 28-year-old winger, who had made 92 appearances for Cardiff after joining in 2017 and helped win promotion to the Premier League in his first season at the club.

Harris, speaking on the issue for the first time at his pre-match press conference, said: “I have to be very careful what I say due to legal purposes, but I can confirm that Nathaniel’s contract was terminated for a serious breach of contract.

“The severity of it, of course, I was consulted by the football club. I have an excellent relationship with the board and the owner. It is a football club decision and I am a part of the club.”

Asked if he was comfortable with the decision to sack Mendez-Laing, Harris replied: “Yes. It’s a decision that hasn’t been taken lightly by the football club.

“It’s a serious decision that impacts on the football club and Mendez himself.

“A lot of thought has gone into it, but ultimately a decision was taken for the best interest of Cardiff City Football Club.”

Harris confirmed that Cardiff players were spoken to about Mendez-Laing’s departure on Thursday and that the Professional Footballers’ Association had been involved in the case.

“The players care about team-mates and they care about the industry they work in and understand the comings and goings within professional football, especially the senior players,” Harris said.

“Some senior players have been given as much knowledge as can be afforded to them, again for legal purposes.

“They deal with it accordingly, they run my dressing room. The players have been very understanding, and after it was discussed at the meeting, we quickly refocused and are prepared for Saturday.”

On the role of the PFA, Harris said: “They are always there to offer advice and support to their players and they did play a big part in this.

“They were informed and part of it all the way through.

“The PFA have a really tough job to do in difficult circumstances. They are a voice of reason and represent players and football clubs as well.”

Mendez-Laing’s representatives, Fifteen Eleven Management, issued a statement on behalf of the former Peterborough and Rochdale player on Thursday morning.

“Following on from (Wednesday’s) announcement that I have left Cardiff City FC, I would like to place on record my thanks to the fans for the support they have shown me over the past three years”, he said.

“I will be making no further comment at this time.”