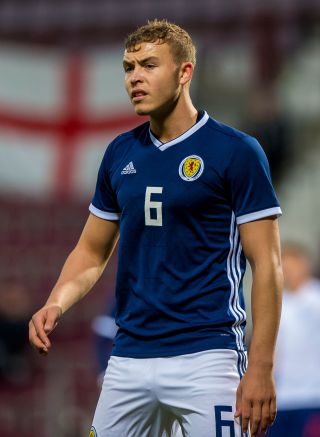 Scotland Under-21 defender Ryan Porteous is ready to make a major impact after seeing mentor Andy Murray battle back to Grand Slam contention.

The former world number one feared his career was over 18 months ago as a debilitating hip injury left him in too much pain to play.

But the Dunblane ace refused to bow to warnings from doctors who advised his time among the tennis’ elite had come to an end and has now rejoined the world’s top stars for this year’s delayed US Open in New York.

The story of Murray’s comeback fight, told in his Resurfacing documentary, has been a tale of inspiration for Hibernian youngster Porteous.

The 21-year-old is signed up to Murray’s management firm and has been able to call up the two-time Wimbledon winner for advice during his own two lengthy stints on the sidelines over the past two years following serious knee injuries.

Now after watching Murray’s brave battle, Porteous is determined to smash his own way to the top.

Porteous – who has joined up with Scot Gemmill’s Under-21 squad ahead of next Tuesday’s European Championship qualifier with Lithuania – said: “Andy’s been great. He was always asking how my injuries were going, keeping on top of me.

“He’s seen it all when it comes to injuries. He’s been down and out, written off, told he’ll never play again but is now back ready to play in major tournaments again.

“He’s someone you’ve got to take inspiration from. If you can tap in and take anything from it, it’s a benefit.

“I know what it’s like to be injured but obviously the issues he’s had have been a lot more significant.

“In his documentary, you can see the mentality he has. It is only elite performers who can drive on in that situation. Normal people would give up but Andy doesn’t know what that means.

“So the inspiration is there and the fact he is in my corner makes it even better.”

Porteous had a small taste of life among the elite after joining a host of Premier League stars in Steve Clarke’s senior Scotland squad for last year’s clashes against Cyprus and Kazakhstan – and he is hungry for more.

“After my call-up I went back to Hibs and said to all the boys that the standard was a bit of an eye-opener,” said the centre-back, who is still waiting for a full cap. “It’s made me desperate for another taste.

“The standard of player was ridiculous. You have to be at that level to play alongside these players and if I can do anything to get back there, I will.

“What took me by surprise was the fact these Premier League players are at that top level every single day. The professionalism, the standard that they train at is something I hadn’t seen before. That’s no disrespect to anyone at Hibs.

“I think everyone will agree the Premier League is just miles better that what we’ve got in Scotland but that is something that I aspire to play beside.”

For now, Porteous is focusing on his Under-21s duties.

Gemmill’s side sit three points behind Group D leaders Czech Republic at the halfway stage and will be looking for a better result than last October’s goalless draw with the Lithuanians at Tynecastle when they head to Vilnius.

Porteous said: “It was disappointing not to take some goals off Lithuania last time at home, so that’s something we will definitely try to rectify this time.”