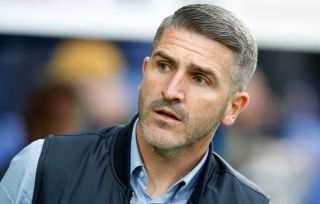 Plymouth boss Ryan Lowe is hoping his side will see their 3-2 Carabao Cup victory over Championship QPR as another big step forward.

Lowe said: “We’re newly promoted to League One and a lot of people have forgotten about it. We certainly haven’t and will thrive on it and use it as a motivation to kick on again.”

Joe Edwards levelled for Plymouth before half-time and Danny Mayor put the hosts ahead of the first time after 55 minutes before Osman Kakay made it 2-2 two minutes later.

Lowe said: “(You are) always delighted when you win any game of football but when you beat a team like QPR….they’re a good Championship team. For us to pit our wits against them we are pleased to have come away with a win.

“We don’t want to get too excited because it’s the first game of the season but I’ve seen plenty of signs – things in that game – that will mean I go home a happy manager tonight because it’s been things we have worked on with the players and they have put into practice.

“They did cause us problems. They’re a very good footballing side with Tom Carroll pulling the strings in midfield but I am more pleased with the way we played and worked our goals, we went toe-to-toe with them, on the front foot against them and got some good goals.

“I can’t praise the lads enough they’ve put into practice what we’ve been working on for the last five, six weeks and they’ve won a competitive match with three goals, it’s just a shame the fans weren’t in here to see it.”

QPR boss Mark Warburton was disappointed at his side’s lack of firepower.

He said: “You want to win every game of football you go into. We knew Plymouth would provide a good test at home here, they are a good team. But you have to put the ball into the back of the net.

“We were quick and sharp and you have to put the ball into the back of the net because goals change games. We didn’t do that today.

“I said to the boys our keeper hasn’t had a save to make all afternoon. I thought their keeper was good, made a number of excellent saves but we have to put our chances away.

“You can’t give away a soft goal, lose possession. We got into good areas but didn’t make the most of the chances.

“In the second half we looked dangerous and I can’t think of a save our keeper has had to make.

“You don’t want to let any goals in, it’s as simple as that. I appreciate we were missing some players but we had more than enough to win a game of football.

“Tom Carroll is a vastly experienced Premier League player, who has had some frustrating injuries, but he is now back fit and strong and we’re delighted to have him join the squad.”