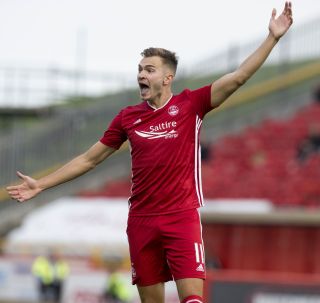 Substitute Ryan Hedges grabbed the only goal as Aberdeen returned from their coronavirus shutdown with a late victory over St Johnstone.

The Dons were unsurprisingly lacking a cutting edge amid an injury crisis up front and after eight players were forced to self-isolate for 14 days following two positive Covid-19 tests.

But Hedges showed some much-needed enterprise three minutes after coming off the bench to cut in from the right and fire a low shot which deflected off a defender and wrong-footed goalkeeper Elliot Parish in the 82nd minute.

The win was far from pretty but a huge boost for Derek McInnes and his embattled side after opening their campaign with a home defeat by Rangers and an ill-judged trip to the pub from a group of players.

Of the eight players whose night out sparked fury from First Minister Nicola Sturgeon and the postponement of three games, only Jonny Hayes started at McDiarmid Park in a match originally called off immediately after the positive tests.

Matty Kennedy and Craig Bryson came on while Dylan McGeouch remained on the bench. Sam Cosgrove and Michael Devlin are injured, while Scott McKenna and Bruce Anderson remain unavailable.

As well as Cosgrove and Anderson, Derek McInnes was also without strikers Ryan Edmondson and Curtis Main through injury and started with midfielder Lewis Ferguson as his furthest man forward, with Niall McGinn and Scott Wright supporting from wide.

Aberdeen started with their new signing from Rangers, Ross McCrorie, and Tommie Hoban, making his first appearance for 18 months following injury, and they looked solid in defence in the second period.

There was little in the way of goalmouth action.

In each half, McGinn had efforts comfortably saved and Callum Hendry failed to capitalise on promising openings after Aberdeen lost possession inside their half.

Saints right-back Danny McNamara forced the best save of the first half when Joe Lewis tipped over his long-range strike.

Aberdeen’s best first-half move came when Wright turned his man and fed Hayes, whose cross was volleyed over by Funso Ojo.

The more attack-minded Connor McLennan came on up front at half-time as Ferguson dropped back.

But, if anything, the second half was even tighter than the opening period as Scottish football again struggled to showcase itself during the English close season.

For a third live televised game running, viewers looked set to be deprived of a goal.

However, Hedges seized the initiative and Aberdeen claimed the three points after Saints substitute Craig Conway fired a decent strike wide from 25 yards.