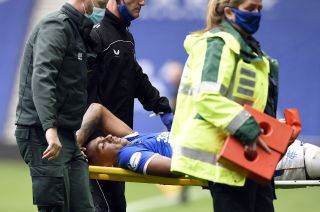 Gallagher does not think Edwards will face retrospective action for his challenge on the Rangers striker, who was stretchered off with a gash near his knee.

Edwards won the ball but then caught the Colombia international with his follow-through.

Scottish Football Association compliance officer Clare Whyte has until 3pm on Tuesday to decide whether to issue Edwards with a notice of complaint for the tackle after referee Kevin Clancy played on.

“It’s unfortunate he follows through and catches Morelos across the knee.

“He hasn’t gone in with a raised boot, he’s followed through and it’s a consequence of his tackle.

“I think Morelos goes in to win the ball, he gets there slightly after Edwards and I think it’s inevitable there will be a collision and there is a collision and it’s unfortunate. But you can’t judge every challenge on a physical outcome, you have to judge it on the tackle.

“If someone picks up an injury as a consequence of a challenge it can be accidental and I think this is.”

A notice of complaint could be raised if the incident is deemed serious foul play of an “exceptional” variety and was not seen in full by Clancy and his fellow match officials.