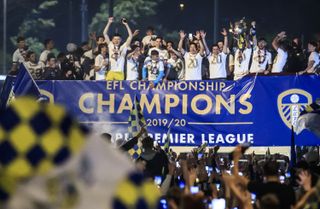 Leeds’ return to the Premier League has been documented in two new episodes of Take Us Home: Leeds United, due for release on Amazon Prime Video on Thursday.

The first six episodes of the fly-on-the-wall documentary, released in August 2019 and narrated by Russell Crowe, followed Leeds’ fortunes from the start of the 2018/19 campaign, Marcelo Bielsa’s first season in charge.

That ended in Sky Bet Championship play-off disappointment as Leeds lost out to Derby in the semi-finals.

But Bielsa guided the club back to the top flight for the first time in 16 years in July and the drama both on and off the pitch has been captured in two more 45-minute episodes.

“The 2019/2020 season saw not only Leeds United win a long-awaited and hard-earned promotion, but also documented the club through the most historic and unexpected of seasons.

“This series will join the prestigious collection of sports documentaries already exclusively available on Prime Video such as All Or Nothing: Tottenham Hotspur and Andy Murray: Resurfacing.”

New Zealand-born actor Crowe added: “I’ve loved Leeds all my life. I used to come home from playing sport when I was a kid to sit down and watch Match of the Day with my brother, and I was just hooked.

“After years of pain, seeing the white army marching on together back to the Premier League where they should be has given me nothing but pleasure.

“To be able to help tell the incredible story of the past two seasons through Take Us Home has been a real honour.”