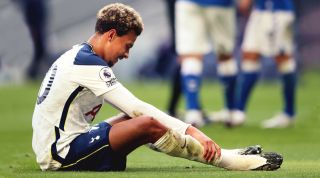 Dele Alli could be on his way out of Tottenham Hotspur with Gareth Bale arriving imminently from Real Madrid.

The midfielder was taken off at half-time in the Premier League curtain-raiser against Everton, which Tottenham subsequently lost 1-0. With Alli featuring less and less for Jose Mourinho in recent months, Spurs are said to be interested in the possibility of offloading him.

One option was for Alli to be included in the deal for Bale. Though it now seems unlikely that the England international would head to the Bernabeu, he could offer something completely different to the profiles already at Real, as none of Zidane's current midfielders really offer a late presence in the box to grab goals.

Alli arrived at Spurs from MK Dons for just £5m and cemented himself in Mauricio Pochettino's side as one of the most exciting young talents in Europe. He featured early in Mourinho's tenure, rekindling his form and chipping in with valuable goals, so for him to leave would still be somewhat of a surprise. Manchester United have a long-standing interest in the player, though he could also move abroad.

In Tottenham's All or Nothing documentary on Amazon Prime, Alli came under a lot of evident criticism from his manager who called him "lazy" and a "bad trainer". Alli seemed to take this feedback on board within the show - though perhaps this concern from Mourinho does run deeper than the cameras showed.

TRANSFER NEWS Thiago Alcantara on the verge of Liverpool move

Mourinho also revealed in the show that Alli was the one player that Sir Alex Ferguson suggested that he sign while he was manager at United.

Gareth Bale's spectacular return to Tottenham Hotspur seems to have come out of nowhere, just days after he was being offered to Manchester United. With the North Londoners keen on Sergio Reguilon too, it seems like the business between Spurs and the recent La Liga champions might be lengthy.

Left-back Reguilon is unwanted at Los Blancos, given their options of Ferland Mendy and Marcelo in that department - he should cost Tottenham around £20m and provide competition to Ben Davies.

TRANSFER NEWS Kylian Mbappe: PSG star tells the club he will leave at the end of the season, with Premier League sides on alert

Ryan Sessegnon has deputised there too - though is perhaps a little more attacking than Mourinho would like, given his tendency to push his right-back up further than his left-back - while Danny Rose is almost certain leave after not being given a squad number.

Aside from the deals for Reguilon and Bale, it's thought that Spurs are still trying to find another forward to provide cover for Harry Kane, plus a new centre-back - given that veteran Jan Vertonghen departed in the summer on a free transfer to Benfica.