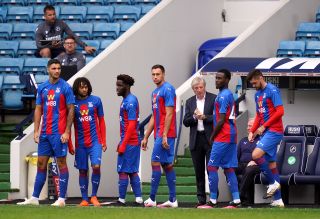 Roy Hodgson is confident Crystal Palace will have more firepower this season after the summer additions of Michy Batshuayi and Ebere Eze.

The Eagles were the second lowest Premier League scorers in the 2019-20 campaign with 31 goals, but still managed to finish 14th and nine points above the relegation zone.

After signing Eze from QPR for a reported £16million fee last month, Palace added Chelsea forward Batshuayi on loan this week and the duo will be part of the squad for Saturday’s opener at home to Southampton.

Even though Christian Benteke and Connor Wickham are absent, Hodgson will be able to select his two new recruits along with Jordan Ayew and Wilfried Zaha, who were the club’s top goalscorers last season with nine and four goals respectively.

“We have signed two players who are more than skilful enough to score goals for us and both have proven goalscoring records,” the Palace manager said.

“We are very happy with that and still hoping as well people like Christian Benteke and Connor Wickham can step up to the plate and add some more goals.

“I definitely feel we are looking stronger this season up front than we were at times last season when we didn’t have the competition for places.”

While Eze is in contention for his debut and Batshuayi, who spent five months on loan at Selhurst Park in 2019, is expected to start, the south Londoners still have issues.

Centre-backs Gary Cahill, James Tomkins and Mamadou Sakho missed the end of last season with hamstring injuries and Patrick Van Aanholt also had surgery on his shoulder during the summer.

The foursome remain unavailable despite Sakho returning to training on Friday and Palace also have Nathan Ferguson (knee), Benteke (foot) and Wickham (unspecified) on the treatment table.

Hodgson added: “In particular these first two or three weeks could be tough because we can’t afford to pick up any more injuries.”

Given Palace’s fitness concerns, Eze could be protected and may have to settle for a spot on the bench against Southampton after he suffered a groin injury in a 45-minute cameo against Charlton on August 29.

That is the only appearance the playmaker has made since he signed from QPR, but his team-mates are well aware of his capabilities after he returned to training this week.

“I don’t think it is difficult to move up the level if you have the ability and certainly Ebere Eze has the ability and he has the personality. I have no fears about him stepping up,” Hodgson said.

“We are convinced we have signed the right player in terms of his ability, personality and character.

“He has settled in very well. We were disappointed to lose him after that first 45 minutes he had, but we would have lost him anyway as he was picked to go away with England’s Under-21s.

“It has been nice to have him with us for the bulk of this week and let him show all the other players what a talent he is.”