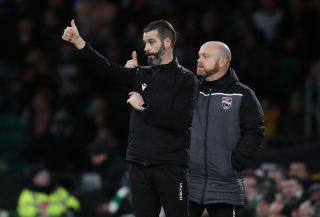 Ross County boss Stuart Kettlewell has been charged with misconduct and for questioning the integrity of a referee by the Scottish Football Association.

Kettlewell was involved in a heated exchange with referee John Beaton after his side’s recent 1-0 defeat at Livingston and was shown the red card as they walked towards the tunnel.

He was angered by Beaton’s decision not to award a foul for his side in the immediate build-up to Livingston defender Jon Guthrie’s winner and later aired his grievances in the media.

Kettlewell has also been issued a notice of complaint for allegedly breaching disciplinary rule 203 – “No member of team staff shall commit misconduct at a match.”

The SFA confirmed the principal hearing is set for Thursday, September 17.

After County’s defeat at Livingston, Kettlewell told a press conference: “You speak about levels of consistency and how you address or speak to someone.

“I have got myself involved with the referee at the end there, but I am not having someone speak to me with such arrogance.

“He sent me off because I lost my cool, but I approach people in the right manner and when someone treats you like a second-class citizen then I won’t be having that.”