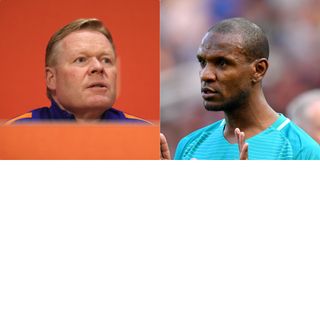 Ronald Koeman has expressed an interest in the vacant managerial role at Barcelona, who on Tuesday confirmed the departure of Eric Abidal as sporting director.

Holland boss Koeman has been linked to the post since the Catalan side were thrashed 8-2 by Bayern Munich in the Champions League quarter-finals on Friday, with speculation intensifying following the sacking of head coach Quique Setien on Monday evening.

Former full-back Abidal has now followed Setien out of the Nou Camp, with the club confirming on Tuesday afternoon that the Frenchman had been removed from his position.

Barca said a new managerial appointment would be made “in the coming days”, and ex-Everton manager Koeman – reportedly the favourite for the job – briefly discussed the vacancy outside the Dutch Football Federation headquarters on Tuesday.

Asked whether he would like to return to Barcelona, the 57-year-old, according to AS, told reporters: “Yes, I’d like to, but it will only be confirmed once I have signed the contract.

“Until then, I cannot say any more about it – even though I’d like to.”

Koeman spent six years as a player at the Nou Camp and scored the winning goal in the 1992 European Cup final against Sampdoria.

The news of Abidal’s exit hot on the heels of Setien’s could be just the start of a summer of overhaul for the club, with the future of captain Lionel Messi very much up in the air.

“FC Barcelona and Eric Abidal have reached an agreement for the termination of the contract binding both parties,” a Barca statement on Tuesday afternoon read.

“The club publicly expresses its gratitude to Eric Abidal for the professionalism, commitment, dedication and positive and close treatment that he has always shown towards all the estates that make up the Barca family, and wishes him luck and success in the future.”

Setien, who replaced Ernesto Valverde in January, had signed a contract to keep him at the club until summer 2022, but was sacked after only seven months in charge.

Even before Friday’s embarrassment against Bayern, Setien was under pressure after he failed to stop Real Madrid clinching the league title.

The one-time Real Betis boss was also unable to lead Barcelona to success in the Copa del Rey, with Athletic Bilbao knocking them out in the quarter-finals.

One of the problems for the new man in charge will be the future of talisman Messi, who will be out of contract next summer.

The Argentinian has so far failed to agree new terms with the only club of his career and, at the age of 33, has been linked with a move.

The new coach will also have to deal with off-field issues.

It has been revealed the next presidential elections will not take place until March, with the current board citing the short break between campaigns and the coronavirus pandemic as key reasons behind the decision.

A statement read: “The club will continue to implement the plan to reverse the sporting and economic situation, based on profound changes to the first team, plus a redefined budget to deal with the new situation caused by Covid-19, before the end of the current mandate.

“The holding of the elections from March 15 next year implies that the board of directors assume full responsibility regarding the 2020-2021 financial year.”

Meanwhile, goalkeeper Marc-Andre Ter Stegen has had surgery on his right patellar tendon and will be sidelined for two-and-a-half months, ruling him out of the start of the 2020/21 campaign.

LaLiga is set to return on September 12, which gives the Catalan club only a short amount of time to appoint a new boss and start rebuilding an ageing squad.