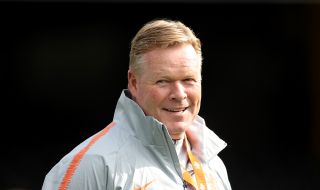 Ronald Koeman has been appointed Barcelona’s new first-team coach after agreeing a two-year deal, the Catalan club have announced.

The 57-year-old Dutchman, who spent six years at the Nou Camp as a player, will leave his job in charge of Holland’s national team to replace Quique Setien following his departure on Friday.

A statement on the club’s official website said: “FC Barcelona and Ronald Koeman have reached an agreement for the Dutchman to take over as first-team coach until 30 June 2022.”

Setien and sporting director Eric Abidal have both been let go by the LaLiga club in the wake of Friday’s humiliating 8-2 Champions League quarter-final defeat by Bayern Munich.

Koeman had signed a four-and-a-half-year deal when he replaced Dick Advocaat in charge of the national team in February 2018.

He will be the third man at the helm this year, with Setien having only replaced Ernesto Valverde in January.

The club, who teased the confirmation by posting a video of Koeman scoring the winning goal in extra time of the 1992 European Cup final on their Twitter account, have also announced that Ramon Planes will replace Abidal.

Koeman will inherit a side which finished second to arch-rivals Real Madrid in LaLiga with five points separating the teams.

Barca failed to win a major trophy this season for the first time since 2013-14 and last lifted the Champions League in 2015 under Luis Enrique.

Koeman made 350 appearances as a defender for Barca and scored 106 goals, having risen to prominence in his native country with FC Groningen, Ajax and PSV Eindhoven.

He has managed previously in Spain with Valencia.