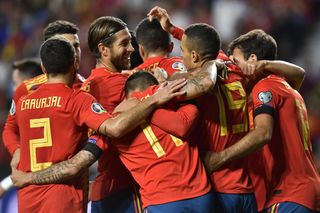 Two goals apiece from Rodrigo and Paco Alcacer saw Spain extend their 100 per cent record at the top of Euro 2020 qualifying Group F with a 4-0 win over the Faroe Islands.

On a night when Sergio Ramos won his record-equalling 167th international cap, a much-changed home line-up struggled to assert themselves and required Alcacer’s late brace to put some gloss on the final scoreline.

Things had looked rather different when the hosts took just 14 minutes to break the deadlock, Mikel Oyarzabal unselfishly squaring for Rodrigo to tap into an empty net.

Ramos prodded an effort over the bar in the 21st minute as Spain continued to dominate, with David De Gea rendered a virtual spectator for the first half hour.

In contrast Faroes keeper Gunnar Nielsen was kept busy, saving from Jose Luis Gaya and Thiago before Rodrigo missed his chance of a second when he headed over from close range.

If the Faroes will have been delighted to have reached half-time with just a single-goal deficit, it marked a brief respite before the Spaniards surged forward in a quest to extend their lead.

Suso and Rodri came close in the opening minutes of the second half before the seemingly inevitable second goal arrived in the 50th minute, Rodrigo scoring with a fierce deflected shot.

Spain were in cruise control but they almost paid for their complacency in the 73rd minute when a mistake by Ramos allowed Joannes Bjartalid to run through and test De Gea.

More pressure paid off in the 89th minute when Alcacer, a 61st-minute replacement for Oyarzabal, flicked home his side’s third after some lovely build-up play.

And there was still time for Alcacer to add his second with a header past Nielsen deep into injury time which completed the scoring.