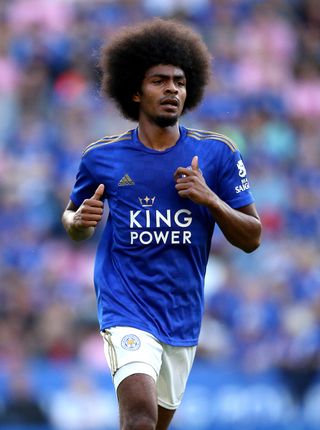 Leicester boss Brendan Rodgers has no qualms about selecting Hamza Choudhury against Newcastle on Sunday.

A challenge by Choudhury on Matt Ritchie during the Carabao Cup tie between the two sides at St James’ Park in August left the Newcastle midfielder needing stitches and with ankle ligament damage.

Magpies boss Steve Bruce called it a “horror tackle” and said it could have ended the career of Ritchie, who has not played since.

Choudhury received only a yellow card at the time and insisted he had no intent to injure his opponent.

Newcastle visit the King Power Stadium in the Premier League this weekend and when asked about Choudhury’s possible inclusion, Rodgers said: “It certainly wouldn’t affect whether we pick him or not.

“To be honest, we never really spoke about it very much – maybe a little the next day after the game, we had a little chat, but that’s it.”

That yellow card remains Choudhury’s only booking of the season in eight appearances, despite the 21-year-old’s competitive nature.

Rodgers said: “He needs to go out and play with that aggression, like all the players do. We need to be aggressive and competitive.

“He has a great temperament and he was just unfortunate in that game, he was just a fraction out, a fraction late. He (Ritchie) gets a sore one on the night but Hamza is a very honest player, like we have said before.”

Leicester bounced back from their defeat at Manchester United by beating Tottenham at the King Power Stadium last weekend.

The atmosphere that day helped Rodgers’ team come from behind to win and the Foxes boss has called for the fans to play their part again against Newcastle.

“The supporters are going to be important for us, because it is going to be a tough game – a different game to last week,” said Rodgers.

“Last week, both teams were trying to win and the stadium was so loud but on Sunday we are probably going to play a team which is going to sit in really deep.

“It will be different to last week as Newcastle will probably be a lot deeper and defend their box, so we are going to have a lot of possession of the ball.

“So we will have to be patient and create but our supporters will have to maintain that patience with the team right to the very end.”

James Maddison is a major injury concern for Leicester. The midfielder is battling to be fit after taking a knock to his ankle during the win against Spurs and Rodgers has described his involvement as “very questionable.”