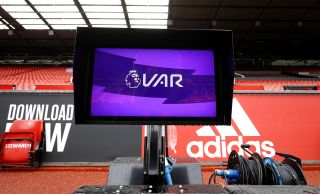 The referee review area (RRA) is set to be used on a regular basis in the 2020-21 season as the English top flight follows guidance set out by world governing body FIFA.

While there will inevitably still be delays over decisions, Masters believes that supporters will find it more palatable to see the on-field referee agonising over the screen rather than stood listening to the VAR at Stockley Park through his earpiece.

“I think we were going to make changes with regard to referee review areas in any event, it was going to become more prevalent next season and I think ultimately it is down to making quicker decisions, more consistent decisions and better decisions,” he said.

“Last year VAR did deliver an improvement in decision-making, the statistics showed that, but it was always going to have some bumps in the road because it was the first season.

“I think if you get those three things I talked about better and right then you’ll see greater acceptance by fans. I think with RRA, fans inside the stadium seeing what is going on, observing a referee making a decision in front of the RRA may help with some of the frustrations people have felt in terms of not knowing what is happening and waiting for a decision to come on the screen.

“So hopefully it will be a more positive experience for fans watching in stadiums and via TV next year.”

One change that was made for the remainder of the 2019-20 season – allowing teams to make five substitutions per match – has been reversed for the new campaign when the limit will return to the usual three.

#PL Clubs also agreed to revert back to using up to three substitute players per match, with a maximum of seven substitutes on the bench. pic.twitter.com/e3Fqtf9QNr— Premier League (@premierleague) August 6, 2020

The chairman of the European Club Association, Andrea Agnelli, said on Tuesday that all his member clubs favoured five substitutes in a season which promises to be more congested than ever.

The majority of Premier League clubs were in favour, Agnelli said, but not the required majority of 14.

Masters was asked whether he had encountered anger from clubs over the decision to go back to three substitutes, and said: “I’m very aware of the strength of feeling because I talk to the clubs.

“I’m aware of the strength of feeling on both sides. Obviously we seek to find harmony or compromise where we can, it’s part of the executives’ and board’s job to do that.

“We’ve been through many challenges over the past six months and stayed together as a collective and I hope and expect we will continue to do so.”