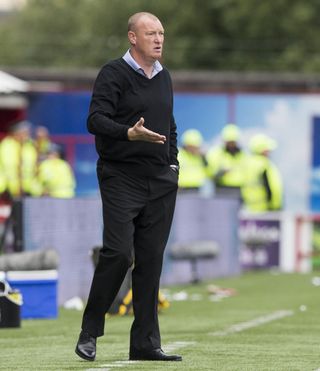 Brian Rice claims clubs like Hamilton are being handed rookie referees as the Scottish FA do not want to risk blooding them in higher profile matches.

Hamilton boss Rice was left frustrated by the decision of novice official David Munro to send off striker George Oakley five minutes into the second half of Saturday’s 0-0 draw at St Mirren.

Munro also faced the ire of Saint boss Jim Goodwin who felt the official did not do enough to clamp down on Hamilton’s timewasting exploits.

“I spoke to Willie Collum, the fourth official on Saturday, and asked what team the ref was playing for as he had more touches than some players.”

Rice was, however, full of praise for centre-half pairing Sam Stubbs – son of former Celtic defender Alan – and Brian Easton for thwarting every St Mirren attack.

He added: “Stubbs and Easton were immense. Everything that came into the box they won their headers. They are proper defenders. You can see Stubbs comes from a football family and the way he’s been brought up watching a top-class defender in his dad.”

Goodwin felt Rice had set his team up to play for a draw but the Hamilton boss insisted that had not been his intention.

He added: “If we had kept 11 men on the park I wouldn’t have been happy just to get a point.  I told the boys they would get great credit for getting a draw with 10 men but apart from playing the Old Firm we have to try to win every other game.”

Goodwin hopes his strikers will soon start to find their scoring touch after another match without a goal.

Saints have netted just three times in six league matches this season, the lowest tally in the division.

He said: “We’ve only got three goals in the league so far so, of course, we are desperate for the boys up front to get that goal.

“We hope one of our strikers gets up and running and gets that bit of confidence and we can gain momentum from that. It’s not happening in front of goal for us but it’s not for the want of trying.”