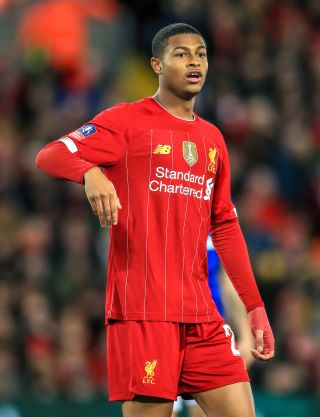 Rhian Brewster’s double earned Liverpool a 2-2 comeback draw with RB Salzburg as the Premier Legaue champions continued their countdown to the new season.

The forward scored twice in the second half after two goals from Patson Daka put the hosts 2-0 ahead in Austria.

Virgil Van Dijk came off with a cut above his right eye four days before Saturday’s Community Shield against Arsenal at Wembley.

Georginio Wijnaldum replaced Curtis Jones at the Red Bull Arena in the only change to the side which beat Stuttgart 3-0.

Daka opened the scoring after three minutes and doubled it 10 minutes later from close range after a Salzburg break.

Liverpool lost central defender Van Dijk with a cut in the second half before Brewster made it 2-1.

The 20-year-old then secured a draw with nine minutes left when he lifted a cool finish into the net from 25 yards after Jones sparked panic in Salzburg’s backline.