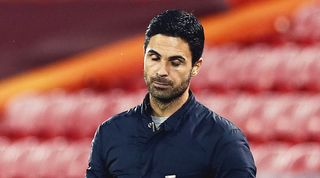 After tracking Thomas Partey since mid-lockdown, it now looks like Arsenal may finally have to move onto other targets in the search for midfield generals.

Mikel Arteta's side were roundly beaten 3-1 away to champions Liverpool last night, with Mohamed Elneny slotting into the midfield. The defeat highlighted the Gunners' desperate need for more steel in the centre of the park, as the Reds overpowered their opponents all game.

Arsenal have been hoping to bring both Houssem Aouar from Lyon and Thomas Partey from Atletico Madrid to North London before Monday's deadline - but as the French schemer looks ever more likely in the closing days, Atletico's stance on Partey hasn't changed and Arteta is started to worry.

The 27-year-old is only going to leave should Arsenal pay the €50 million clause in full, with the midfielder's salary and agent fees also providing stumbling blocks to the deal. Arsenal need to shift deadwood of their own - if they can't get bodies out the door this week, they may need to look at the next best option after Partey.

Arsenal could well return to Lille in search of a Partey plan B, with Boubakary Soumare an alternative to the Ghana midfielder. The Gunners have already landed defender Gabriel this summer from the French club, as well record signing Nicolas Pepe last year.

Talks for Aouar are progressing nicely though, with Arsenal director Edu leading the discussions with Lyon opposite Juninho, who he has a good relationship with. Huss Fahmy from Arsenal's contract team is said to have flown out to France and Arteta is hopeful that a deal will be struck soon.

COMMENT Diego Simeone's Atletico Madrid may be past their best: how major signings have left them a diminished force

Arsenal have not given up entirely on Thomas Partey and are still hoping to complete a deal, especially as Diego Simeone's club are said to be cash-strapped. Atletico retain an interest in Lucas Torreira but don't want the Uruguay midfielder included in any deal for Partey.

Arsenal still want to shift Matteo Guendouzi, Sokratis Papastathopoulos and Shkodran Mustafi before the deadline, too. They're unlikely to receive a big fee for either of the latter two, while no one has offered close to the £25m that Arsenal indicated would be enough to sign Guendouzi.

It's thought that Roma have expressed an interest in taking Alexandre Lacazette off the Gunners' hands, too. Lacazette missed a vital one-on-one last night against Liverpool and Arteta is willing to listen to offers - though the Italian giants aren't prepared to pay anything near to what Arsenal would like.

Arsenal have had the second-least amount of shots in the Premier League's first three games, with only West Bromwich Albion registering fewer. At 22, Houssem Aouar is a player for the future as well as for now. Arsenal will be keen to get his signature finalised soon.