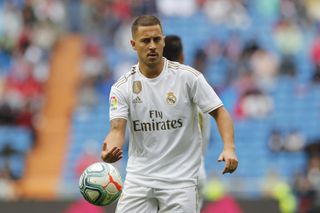 Real Madrid coach Zinedine Zidane has backed Eden Hazard to rise to the challenge if called upon in the derby against Atletico.

Los Blancos head to the Wanda Metropolitano top of LaLiga, having produced a response to their 3-0 Champions League defeat at Paris St Germain with successive wins.

Belgium playmaker Hazard has yet to make a major statement during his cameo roles so far after regaining fitness following an £89million summer switch from Chelsea.

Zidane, though, is confident Hazard will show his qualities soon enough.

“We know the player we have. At any time he will respond. He did in Seville,” said Zidane, whose much-changed side beat Osasuna 2-0 in midweek.

“Of course, everyone expects more from him and he knows. We are with him and he is with us.

“You have to go game by game because he will surely be the player we want him to be.”

Zidane told a press conference: “This type of player is prepared for these matches. I have no doubt about Hazard or the rest of the players.

“We are thinking about an outing in a great performance, we know that it will be difficult and that we will have to do things right from the first minute to the last. We need to be prepared.”

Zidane played down the significance of the 7-3 pre-season defeat to Atletico in New Jersey, with their rivals out to secure a first LaLiga derby win since 2016.

“We have to have a cool head and think about what we have to do,” the Real Madrid coach said.

“Atletico are a difficult opponent that have a lot of weapons, but what interests me is what we are going to do.”

Zidane added: “We are prepared to put in a big performance. We will have to put in a lot of things, not just intensity.

“I am not thinking about the negatives, just about a big game tomorrow. If we are in the match from the first to the last minute we will do well.”

Midfielder Luka Modric could be in contention following four matches out with a thigh injury having resumed training again, as have Isco and Marcelo.

Zidane confirmed teenage Brazilian forward Rodrygo was not set to be involved with the first team, despite impressing with a goal soon after coming on against Osasuna.

“I am happy for what happened the other day, but we will take it easy,” the Real Madrid coach said.

“The decision had been made before. Tomorrow he will play for Castilla (the reserve team) and he is delighted.”

Atletico, meanwhile, must do without Alvaro Morata after the former Real striker was sent off in the 2-0 win at Mallorca on Wednesday.

The club’s appeal against the ban was unsuccessful, but central defender Stefan Savic believes the midweek victory was important in preparation for the derby.

Savic told the club’s official website: “It was important to play well and earn the three points. We have a lot of games in this period and it was important to win, also in order to arrive at the derby in the best possible way.”

Former Tottenham full-back Kieran Trippier should return having been rested for the Mallorca clash.