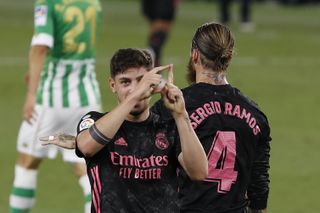 Real Madrid had to come from behind for their first win of the season as a Sergio Ramos penalty clinched a 3-2 win against 10-man Real Betis.

Betis had got themselves back into the game after going a goal behind early on but a red card for Emerson allowed Madrid to capitalise in the final stages and claim all three points at the Benito Villamarin Stadium.

Madrid took an early lead in the 14th minute when Karim Benzema ran down the right before sending in the cross for Federico Valverde to poke into the back of the net from close range for his first goal since November.

Betis were rewarded for their first-half pressure with an equaliser as Sergio Canales curled the ball to Aissa Mandi who headed home.

The home side then capitalised on their momentum as William Carvalho fired past Thibaut Courtois in the 38th minute to give Betis the lead.

Just after half-time, Emerson gifted Real the equaliser, turning the ball into his own net from a Dani Carvajal cross under pressure from Benzema.

In the 64th minute, the referee judged Emerson had barged Luka Jovic in the back as he ran through one on one with keeper Joel Robles and the Brazilian was shown a red card.

Betis were unable to hold out for the draw after a penalty was awarded to Madrid on VAR review for a Marc Bartra handball in the 82nd minute. Ramos beat Joel from the spot to secure all three points for the visitors.