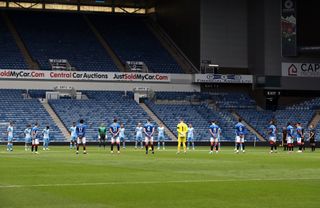 Rangers say they are holding talks with the Scottish Government over the return of fans to Ibrox after announcing the club has sold out its season tickets for the third year running.

The Light Blues faithful have bought up 46,500 season passes despite the current closed-door restrictions preventing supporters from attending matches.

Gers chiefs had been hoping to welcome back a small number of supporters for their Scottish Premiership clash with Dundee United after the international break.

However, plans for a test event have now been shelved after the Scottish Government re-introduced lockdown measures in Glasgow City, West Dunbartonshire and East Renfrewshire in response to a fresh cluster of coronavirus cases.

The new restrictions – which bars residents within the three affected areas from visiting other households – are set to last a fortnight, although they could be reviewed after the first week.

But Ibrox bosses are keen to move forward with the re-introduction of fans to terraces and hoping to discuss the matter with Holyrood officials soon.

A spokesman said: “Rangers can confirm that we are in regular dialogue with the Scottish Government in relation to the return of fans to Ibrox stadium when it is safe to do so.”

Confirming the test event at the Dundee United game had been called off, a spokesman for the Scottish Government spokesman said: “We are engaged with representatives from a range of sporting bodies for a small number of pilot events to examine the feasibility of having spectators in stadia and planning has been underway for a number of months to allow this to happen.

“Discussions are still underway and further updates will be provided to stakeholders in due course but we are clear no proposed test events will take place within the three council areas for the duration of the restrictions.”

He said: “I have been continually astonished by the passion and loyalty that our supporters show our club.

“Time and again, our supporters surpass expectations. In the midst of the uncertainty surrounding Covid-19, selling out season tickets at Ibrox is even more special.

“As we approach our 150th year, Rangers fans demonstrate their unrivalled loyalty to our club once again.”