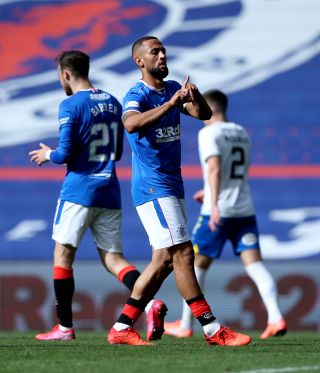 Kemar Roofe helped lift Rangers clear at the top of the Scottish Premiership as his first goal for the Light Blues set up a 2-0 Ibrox win over Kilmarnock.

There was no sign of Lille target Alfredo Morelos after the striker reportedly asked to be left out of the squad amid continuing speculation over his future.

Gerrard admitted on Friday that the Colombian was not “looking himself” following Gers’ decision to reject a £16million offer from the Ligue 1 side.

But the Rangers boss will have been delighted to see his new signing from Anderlecht get off the mark.

The former Leeds hitman marked his first Gers start with the opener just after half-time as the Light Blues bounced back from last weekend’s slip-up at Livingston.

This was another workmanlike display to follow on from the laboured showing at the Tony Macaroni Arena but at least there were no late nerves as Ryan Kent’s third goal of the season sealed victory with 13 minutes left.

While Gers move three points clear of Hibernian – who play St Johnstone on Sunday – at the summit, Killie drop into the bottom two having taken just two points from the first 15 available.

The Gers faithful were left with a horrible feeling of deja vu as last weekend’s struggles brought back memories of their post-Christmas collapse last term.

And it was another familiar tale for much of the opening 45 minutes as Killie sat in a stubborn shape and refused to budge, with the hosts short on ideas as how to cut them open.

It took 19 minutes to conjure a chance, with Cedric Itten – also making his full debut – wasting a golden opportunity to open his Ibrox account as he blazed over from a loose Kirk Broadfoot header.

Kent’s pace saw him race on to James Tavernier’s pass but the Leeds target could not follow up an immaculate first touch with a finish as Aaron McGowan and keeper Danny Rogers put a combined block in.

Referee Kevin Clancy turned down a big Rangers penalty appeal as Ryan Jack’s cross brushed Stuart Findlay’s arm while Rogers was also frustrating the hosts as he brilliantly clawed away another Kent strike.

Filip Helander had one last go at breaking Killie’s resistance before the break but while the Light Blues were frustrated as they trudged down the tunnel level at the break, it would not be long before their persistence paid off.

The visitors should have learned their lesson after allowing Borna Barisic far too much space on 49 minutes to pick out Roofe, who angled a header against the far post.

But Alex Dyer’s team failed to heed that warning and paid the price 60 seconds later as the big Croatian swept in a low cross for Roofe to steer home his first Gers goal.

Dyer introduced Nicke Kabamba for the last half hour, hoping he would rough up the Ibrox defence in the same way he did with Celtic’s earlier this month.

But Rangers wrapped up the points late on. Aaron Tshibola put his body on the line to deny a fierce Tavernier hit but there was no one there to stop Kent sweeping home on the rebound.

A third would have flattered the hosts but they came close in stoppage time, with Gary Dicker’s goal-line clearance thwarting substitute Greg Stewart.